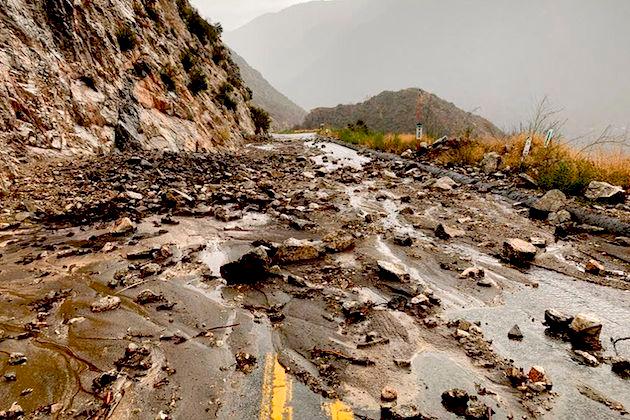 MONTECITO, California: The latest Pacific storm to hit California killed nearly 12 people and prompted the evacuation of some 25,000 others, including the entire town of Montecito and nearby areas of the Santa Barbara coast.

The Montecito evacuation zone was among 17 California regions where authorities worry that torrential downpours, ongoing since late December, could unleash lethal cascades of mud, boulders and other debris in hillsides stripped bare of vegetation by past wildfires.

Celebrities, such as media mogul Oprah Winfrey and Britain's Prince Harry and his wife Meghan, are among the picturesque Montecito's 9,000 residents.

Another famous Montecito resident, actress-comedian Ellen DeGeneres, posted a video on Twitter of herself standing in the rain beside a flooded torrent flowing through what she described as a normally dry creek bed near her property.

"We need to be nicer to Mother Nature, because Mother Nature is not happy with us," she said in the video. "Let's all do our part. Stay safe, everybody. Yikes."

All 15 districts of Montecito were ordered to immediately evacuate, along with portions of the city of Santa Barbara and adjacent areas of Carpinteria and Summerland where "burn scars" posed a threat of mudslides, the Montecito Fire Department said.

The torrential rains, along with heavy snow in mountain areas, were the product of yet another "atmospheric river" of dense moisture funneled into California from the tropical Pacific, powered by sprawling low-pressure systems churning offshore.

At least a dozen fatalities have been attributed to several back-to-back storms that have lashed California since December 26. Experts say the growing frequency and intensity of such storms, interspersed with extreme dry spells, are symptoms of climate change.

The National Weather Service has warned that the latest onslaught would impact most of California's 39 million residents, with up to 5 inches of additional rain expected to fall near the coast and more than a foot of snow on the Sierra Nevada mountains over the next few days.