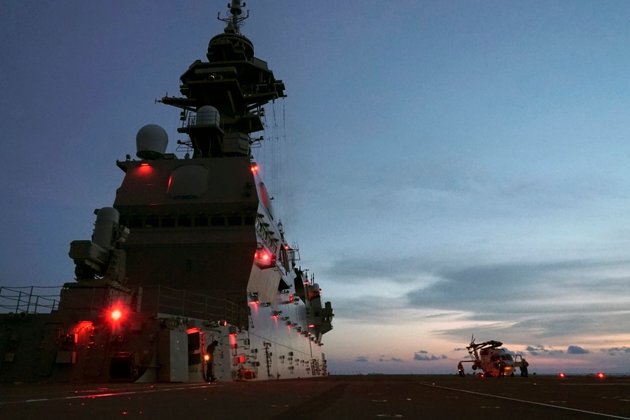 Seoul, South Korea - Japan this month took a major step toward loosening its postwar military restraints, unveiling new policies that will allow the Asian giant to play a much bigger role in regional and global security affairs.

Under a new National Security Strategy (NSS) and two other documents released in mid-December, Japan will roughly double defense spending over the next five years and for the first time deploy missiles that can hit military targets in other countries.

The policies smash through decades-old taboos in Japan, which has embraced a relatively restrained defense posture under its technically pacifist constitution drafted by the United States following Tokyo's defeat in World War II.

"By realizing the vision articulated in the three documents, Japan might finally become a 'normal nation' in terms of its ability to defend itself," said Tobias Harris, a Japan politics specialist and deputy director at the German Marshall Fund.

"But these documents are the result of a long-term process of thinking about Japan's changing threat environment," Harris said in a blog post.

Japan has steadily boosted its de facto military, called the Japan Self-Defense Forces, especially as China has become more powerful and assertive with its neighbors over the last decade or so.

But Japan's self-imposed constitutional restraints mean its military power does not measure up to its economic prowess. Though Japan has the world's third-largest economy, it ranks only ninth in global defense spending.

That could soon change. The new plan would boost defense spending to 2% of Japan's GDP, up from the traditional 1%, over the next five years. Japan would then only trail the United States and China in overall defense spending, barring any other changes in the global rankings.

One of the most significant aspects of Japan's new defense changes is the authorization of what Tokyo refers to as "counterstrike capability," or the ability to hit bases on enemy territory.

Acquisition of such weapons has long been controversial, since Japan's constitution has been interpreted as prohibiting arms that can be deemed as offensive, not defensive, in nature.

Instead of acquiring such weapons, Japan has historically relied on missile defense, as well as the firepower of its treaty ally, the United States.

However, Japan's updated NSS says having counterstrike capability is a "minimum necessary measure for self-defense."

By obtaining such capabilities, Japan can deter enemy attacks, the document adds, noting that preemptive strikes "needless to say...remain impermissible."

As part of its counterstrike plans, Japanese officials say Tokyo intends to buy hundreds of U.S.-made Tomahawk cruise missiles, which have a range of up to 2,500 kilometers.

Those capabilities are meant to help Japan deal with what the NSS describes as "the most severe and complex security environment since the end of World War Two."

Japan is especially worried about China, which has become more authoritarian at home and more assertive about defending its interests abroad.

In recent years, China has expanded military exercises near Japan-claimed islands, often in coordination with Russia.

Beijing has also escalated its threats toward self-ruled Taiwan and refuses to rule out taking it by force. If China were to invade Taiwan, many Japanese fear they would be pulled into a conflict. Those fears were heightened in August when China fired ballistic missiles into Japan's exclusive economic zone during a show of force against Taiwan.

According to the NSS, China is "the greatest strategic challenge" facing Japan.

North Korea, meanwhile, presents a "more grave and imminent threat to Japan's national security than ever before," the document says.

This year, nuclear-armed North Korea has launched a record number of ballistic missiles, including some that flew over Japan, prompting residents to take shelter. Pyongyang has also adopted a more aggressive nuclear posture, even asserting its willingness to use nuclear weapons preemptively.

Russia, too, is defined in the NSS as a "strong security concern" due to its closer ties with China and invasion of Ukraine.

Russia's unprovoked invasion of its weaker neighbor shocked many in Japan, and analysts say the war is playing a significant role in convincing Tokyo to embrace a more assertive foreign policy.

More Assertive Japan Stands Up to Russia Over Ukraine

Under Prime Minister Fumio Kishida, Japan has been on the frontlines of an international effort to punish Moscow for its war. Recent opinion polls show broad public support for that approach, as well as for Japan's defense buildup.

"Japan is more willing to join the United States and other like-minded democracies to compete with those autocracies and hostile nuclear powers," says Tetsuo Kotani, senior fellow at the Japan Institute of International Affairs.

In a statement, White House National Security Advisor Jake Sullivan praised Japan's new defense strategy as a "bold and historic step to strengthen and defend the free and open Indo-Pacific."

Moscow accused Japan of embracing "unbridled militarization." Pyongyang denounced the plan as a "serious challenge" to international peace. In Beijing, officials said Japan was "hyping up the 'China threat' to find an excuse for its military buildup," but was doomed to fail.

Those criticisms risk being seen as hypocritical, since each nation is embarking on its own military modernization.

"These are all countries that have huge stockpiles of long-range missiles," points out James Brown, associate professor of political science at Temple University in Tokyo. "So, the idea that they should be criticizing Japan for a much more measured and moderate change in its security stance, I think, is without foundation."