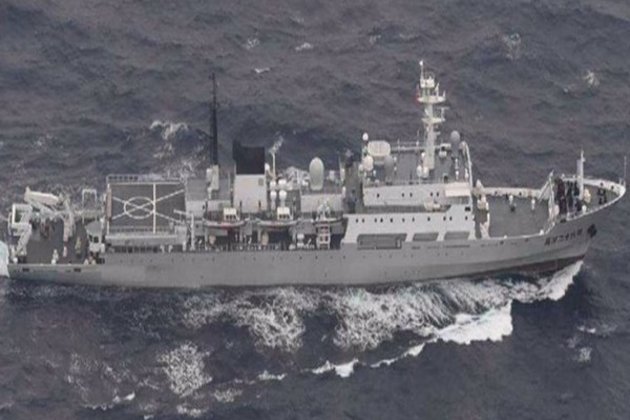 According to the Japan Ministry of Defense/Self-Defense Forces, on December 19, it was confirmed that a Chinese Navy Shupang-class survey ship sailed through Japan's territorial waters near Yakushima Island.

"This is the 9th time, the first since November this year, that we announce Chinese Naval vessel's entry into Japan's territorial waters," tweeted Japan Ministry of Defense/Self-Defense Forces.

The Ministry further added, "These Chinese naval activities are of national security concern. JMOD/JSDF resolutely protect Japan's territory, territorial waters, and airspace."This show of force by the PLAN coincided with the release of a new National Security Strategy (NSS) by Japan on December 15, 2022. According to this new doctrine, Japan intends to acquire counter-attack capabilities.

"We live in the world of a historical inflection point and in the face of the most severe and complex security environment since the end of WWII," the new NNS outlines, referring to increased activities of North Korea, China and Russia in Japan's Area of Security.

"A key to deterring invasion against Japan is counterstrike capabilities that leverage stand-off defense capability and other capabilities," it added.

Japan is finding itself in the midst of the most severe and complex security environment since the end of WWII with mounting threats from China and North Korea.

Japan has responded with what they call a "major shift" in defence policy. The new strategy does away with decades of precedent to acquire counter-strike capabilities, with a special focus on a free and open Indo-Pacific (FOIP).

Japan will build a multilayered network among its allies and like-minded countries, expand it, and strengthen deterrence. Thus, while utilizing frameworks such as the Japan-US-ROK, and Japan-US-Australia, Japan will enhance security cooperation with Australia, India, the ROK, European countries, ASEAN countries, Canada, NATO, EU, and others, read the National Security Strategy of Japan statement.

China has set clear goals to achieve "the great rejuvenation of the Chinese nation," the full completion of "building China into a great modern socialist country" by the middle of this century, and the prompt buildup of the People's Liberation Army to be elevated to "world-class standards," added the statement.

Under these national goals, China has been increasing its defence expenditures at a continuously high level and extensively and rapidly enhancing its military power, including its nuclear and missile capabilities, without sufficient transparency.

In addition, China has intensified its attempts to unilaterally change the status quo by force in the maritime and air domains including in the East and South China Seas, such as its intrusions into the territorial waters and airspace around the Senkaku Islands, and has expanded and intensified its military activities that affect Japan's national security in the Sea of Japan, the Pacific Ocean, and other areas as well, added the statement.

Moreover, while maintaining its policy of peaceful reunification of Taiwan, China has not denied the possibility of using military force. In addition, China has been intensifying its military activities in the sea and airspace surrounding Taiwan, including the launch of ballistic missiles into the waters around Japan.

Regarding peace and stability across the Taiwan Strait, concerns are mounting rapidly, not only in the Indo-Pacific region including Japan, but also in the entire international community, added the statementAlso, Japanese Government officials approved on Friday three documents laying out the new policies. Prime Minister Fumio Kishida said current capabilities governing Japan's Self Defence Forces are "insufficient," reported NHK World.

Kishida said, "Missile technology is rapidly improving. There is also the possibility of attacks where many missiles are launched at the same time. Given all this, counterstrike capabilities that would work as a deterrence are absolutely necessary."Kishida said the government will increase defence spending to about 2 per cent of GDP by fiscal year 2027. That would bring the total to 43 trillion yen, or about 315 billion dollars. He said the money will come from tax increases to be imposed in 2024 or later.

US National Security Advisor Jake Sullivan said in a statement that the shift represents a "bold and historic step" from one of his country's closest allies. He said it will help the Indo-Pacific region achieve "lasting peace, stability and prosperity."The new policy documents describe China as Japan's "biggest strategic challenge." That drew an angry reaction from Beijing on Friday.

Chinese officials said the policy "ignores" reality. They accused Japanese leaders of hyping an imaginary "China threat" as an excuse for a military buildup. They say the effort is doomed to fail, reported NHK World. (ANI)