China suggests reason for deteriorating relations with US 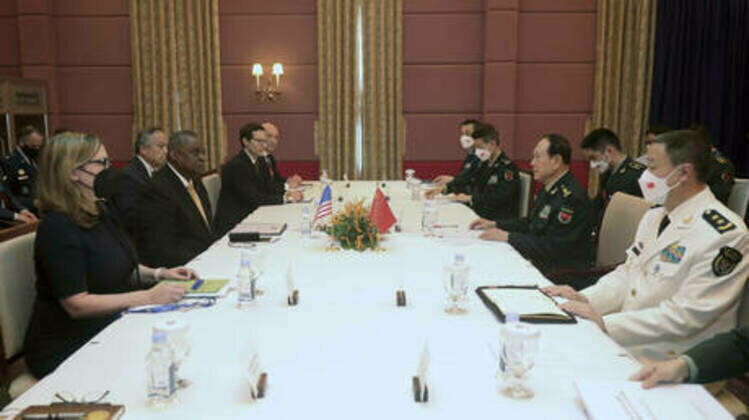 Washington bears full responsibility for the current decline in US-China relations, Beijing has argued. Its Defense Ministry claimed the US leadership has based its policies toward China on a flawed assessment.

Speaking to the state broadcaster CCTV on Tuesday, ministry spokesperson Tan Kefei accused Washington of making a strategic misjudgement, and said China is not to blame for the current bilateral difficulties.

On the same day, Chinese Defense Minister Wei Fenghe told his US counterpart, Defense Secretary Lloyd Austin that Beijing viewed Taiwan as one of its core interests, and a red line.

"The resolution of Taiwan is a matter for the Chinese people, no external force has the right to interfere," Wei said during his meeting with Austin in Cambodia.

The minister also expressed hope that Washington would respect Beijing's national interests and adopt a more rational approach toward China - something that could reverse the negative trend in bilateral ties.

Over the past few years, consecutive US administrations have grown increasingly critical of China, with Washington now openly branding it a strategic adversary.

Tensions saw a sharp escalation in early August, when US House Speaker Nancy Pelosi visited Taiwan, which China considers part of its territory, seized by separatists.

Infuriated by Washington's failure to heed its warnings, Beijing staged massive military drills in the Taiwan Strait in the days that followed.

Taiwan has been de facto independent since 1949 when the losing side in the Chinese Civil war relocated to the island and established its own administration there. In keeping with the One China principle, most countries have not recognized Taiwan as an independent state. However, Taipei has long enjoyed close unofficial relations with some countries, most notably the US. Washington has for years provided Taiwan with weapons.

China, in turn, insists that the island is an inalienable part of its territory. President Xi Jinping has repeatedly named the 'reunification' of Taiwan with the mainland as one of Beijing's key objectives. He has also made it clear that China does not rule out a military option should all other avenues fail.