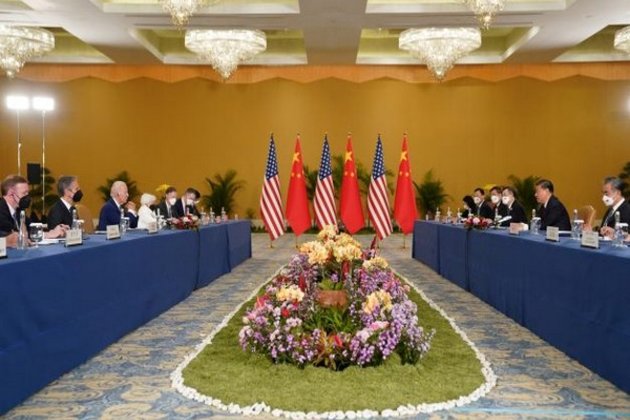 The high-stakes meeting between Chinese leader Xi Jinping and US President Joe Biden on the sidelines of the G20 summit in Bali has ended at 8:48 pm local time Monday, Chinese state broadcaster CCTV reported.

Ahead of the meeting, US officials said there wasn't a set time limit but suggested they expected the meeting to run "a couple hours," reported CNN.

"I think it'll be a couple hours. Could go longer than that, might not," national security adviser Jake Sullivan told reporters aboard Air Force One en route Bali.

Analysts from both the US and China have cautioned that the talks are unlikely to result in any major breakthroughs or dramatic shifts in the relationship, reported CNN.

When President Joe Biden took office in January 2021, there were expectations on both sides of the Pacific that he would back away from the trade war his predecessor started with China nearly three years earlier.

Frustrated by China's huge trade surplus and accusing it of stealing US intellectual property, former President Donald Trump slapped tariffs on USD 50 billion of Chinese goods in June 2018. Beijing countered with its own tariffs, and the spiral continued until a so-called truce was agreed in 2020, reported CNN.

Instead of rolling back those measures, Biden has quietly intensified the trade conflict. In October, his administration imposed sweeping new curbs designed to curtail China's access to technology critical to its growing military power.

Against this backdrop of rising competition, and amid fears of a global recession, the leaders of the world's two biggest economies are meeting on the sidelines of the G20 summit in Bali, Indonesia on Monday.

Speaking with reporters in Bali, US Treasury Secretary Janet Yellen said the meeting was intended to stabilize the relationship and expressed hopes that it would lay the groundwork for bilateral economic engagement.

The stakes are high for both sides, as well as the rest of the world. China, with its nearly USD 18 trillion economy, has in recent years been the main driver of global growth. But Covid lockdowns and a real estate crisis have slammed the brakes on its expansion this year, reported CNN.

For decades, regular lines of communication existed between US officials and their Chinese counterparts, but most of those avenues were cut off after House Speaker Nancy Pelosi visited Taiwan in July.

"It's important for heads of state to speak directly," Yellen said. "There is a lack of trust in this relationship. If Xi and Biden send the signal that it's time to resume communications, hopefully, this will trickle down to the lower levels." (ANI)