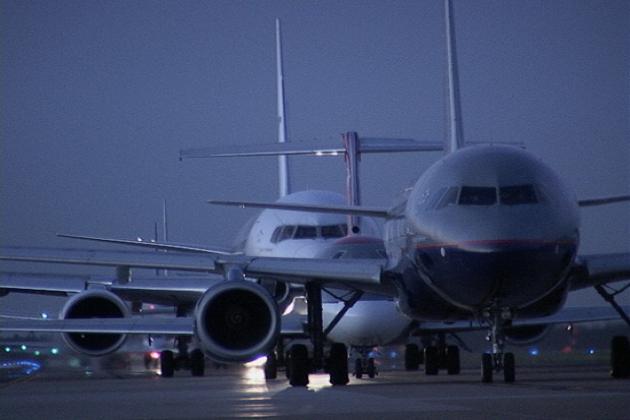 When catching a flight, the general rule is to arrive two hours early for domestic flights and three hours before an international one. But with the sheer amount of flight cancellations and delays across the country, there's a good chance you'll run into complications no matter when you arrive at the airport. That's why we gathered a year's worth of daily cancellation and delay data to determine which airlines and airports have struggled the most to provide uninterrupted travel to their customers. Read on to find out when and where you're most likely to have a pleasant airport experience and which airports you may want to avoid.

Recently, many people have had their flights delayed or scrapped altogether. Let's see which airlines have had the most trouble transporting their passengers on time.

Over the last several months, U.S. airlines have canceled more than 128,000 flights, already surpassing the almost 117,000 flights that were canceled during all of 2021. There are still plenty more headaches to come for flyers in 2022, likely due to shortages in airline equipment and personnel. Many airlines retired or scrapped a significant amount of machinery at the height of the pandemic, and there are fewer incoming pilots to replace the ones retiring.

In January, Southwest Airlines cited severe weather and a spike in COVID-19 infections as their reason for canceling over 500 flights. For whatever reason, they've continued to struggle even more since then. Among all major U.S. airlines, Southwest canceled and delayed more flights than any other major U.S. airline, resulting in delays of over 16.8 million minutes - over 3 million more minutes than the next worst airline (American). However, Allegiant Air was consistently the least reliable when analyzing the percentages of canceled and delayed flights by airline: 34% of Allegiant flights were canceled in the past year.

Flying from one state with zero complications doesn't mean you'll be as lucky in another. We've analyzed the airports with the most and least cancellations and delays to determine which could most likely derail your plans.

From June 2021 to June 2022, Dallas/Fort Worth International Airport (DFW) canceled the most flights (10,612) across the country. Things didn't get much better this past August, as long periods of heavy rain and thunderstorms plagued airports all over Dallas. Severe storms from Texas to the East Coast also hit hard in Denver, leading to many flight cancellations at the Denver International Airport (DEN). But the highest percentage of canceled flights in the last year were by New Orleans' MSY and Newark's EWR airports (5%).

While delays aren't as tragic as cancellations, they're still a major inconvenience. Denver had to postpone 61,617 flights over the course of a year, while DFW, the leading cancellation airport, ranked second for most delays.

Smooth sailing is hard to come by at just about any airport, but Honolulu's Daniel K. Inouye International Airport (HNL) in Hawaii had fewer delays and cancellations than any airport in the country. The Aloha State shouldn't just be known for its breathtaking coastline and rich culture its Oahu airport deserves some distinction too.

If you're about to roll the dice at the airport, perhaps public opinion can shed some light on what you can expect. We've noted the monthly search volumes of people researching flight cancellations and delays to determine when people are most nervous about travel.

Since September 2021, searches for "flight cancellations today" and "flight delays today" both peaked in December, January, and June. But during the first and last month of the year, people appeared more concerned about cancellations than delays, perhaps because travelers expected delays at the very least - as we've seen, they're far more common than cancellations. Even Hawaii, which had the least amount of airport issues across the country, ranked in the top five states where flight delay and cancellation searches occurred the most.

While many airlines have struggled with providing travelers with a stress-free experience, Southwest notably had the most cancellations and delays recently. But airport operations have also been unreliable nationwide, perhaps nowhere more so than Dallas/Fort Worth (the leader in flight cancellations) and Denver International (the leader in delays). Meanwhile, we found the least number of either at Hawaii's Daniel K. Inouye International Airport in Honolulu. As airports and airlines continue to recover from the pandemic, there's no telling what to expect now - aside from perhaps more issues during December and January. All we can do is stay up-to-date, then sit back and try to enjoy the ride.

We analyzed data from the Bureau of Transportation Statistics on the number of flight delays and cancellations across major U.S. airports and airlines from June 2021 to June 2022. We collected Google search volume data from Google Trends from September 2021 to September 2022.