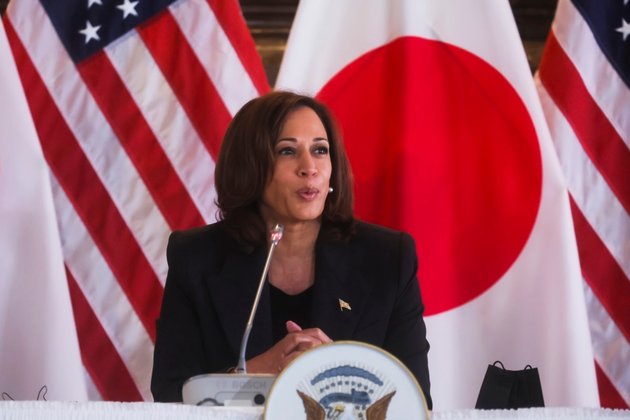 tokyo - U.S. Vice President Kamala Harris blasted China's foreign policy Wednesday in aHarris made the comments in an address to U.S. service members aboard the USS Howard, a Navy destroyer docked at the Yokosuka Naval Base, the largest U.S. naval installation in the world.

"China is undermining key elements of the international rules-based order. China has challenged freedom of the seas. China has flexed its military and economic might to coerce and intimidate its neighbors," said Harris.

Harris, who is in Japan to attend former Prime Minister Shinzo Abe's state funeral, also criticized China's "disturbing behavior in the East China Sea and in the South China Sea, and most recently, provocations across the Taiwan Strait."

In recent weeks, China has surrounded Taiwan with military exercises, in what appears to be an attempt to reshape the status quo across the sensitive Taiwan Strait.

China claims self-ruled, democratic Taiwan, even though the island has never been ruled by the Chinese Communist Party. Beijing accuses the United States of inappropriately supporting what it views as "independence forces" in Taiwan.

Although the United States has no official relations with Taiwan, Washington is one of Taipei's most important international partners and regularly approves large weapons sales to the island's democratic government. It has also sailed military vessels through the Taiwan Strait, angering China.

"The United States believes that peace and stability in the Taiwan Strait is an essential feature of a free and open Indo-Pacific," Harris said. "We will continue to fly, sail, and operate, undaunted and unafraid, wherever and whenever international law allows."

"We will continue to oppose any unilateral change to the status quo. And we will continue to support Taiwan's self-defense, consistent with our long-standing policy. Taiwan is a vibrant democracy that contributes to the global good-from technology to health, and beyond, and the United States will continue to deepen our unofficial ties," she added.

Taiwan came up in Harris' conversations with the Japanese, South Korean, and Australian prime ministers in Tokyo, according to a senior administration official who briefed reporters but declined to be identified.

"We need to be aligned. And I think we are significantly aligned...I think there was a mutual commitment by all the countries involved to peace and security in the Taiwan Strait," the official said.

Harris on Thursday heads to Seoul, where she will visit the demilitarized zone separating North and South Korea.

North Korea has launched a record high number of missiles this year, including a short-range ballistic missile on Sunday ahead of Harris' visit.

The DMZ stop is meant to signal U.S. commitment to defending South Korea, according to the senior administration official.

"The key messaging that she's talking about on this trip is how our defense commitments are ironclad. We know there's been a lot of discussions with the Koreans about extended deterrence commitments. And to really put those words into action, we believe it's a powerful signal of that," the official said.

While in Seoul, Harris will also meet South Korean President Yoon Suk Yeol, a conservative who took office in May. Yoon has pushed to expand South Korea's alliance with the United States and supports increased shows of U.S.-South Korean military might.

Such demonstrations have increased in frequency and intensity amid predictions that North Korea will soon conduct its seventh nuclear test.