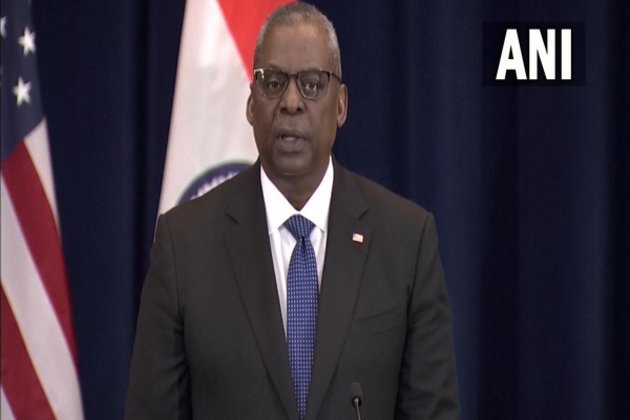 By Reena BhardwajWashington [US], September 27 (ANI): US Defence Secretary Lloyd Austin sharply criticised China for "unprecedented provocations in the Taiwan Strait" during bilateral talks with External Affairs Minister Dr S Jaishankar at the Pentagon and said that India and US, the two great democracies are working together toward a brighter future for the Indo-Pacific as the world faces sustained challenges to peace, security and prosperity in the region and beyond.

"Our bilateral defence ties are just one way that our two great democracies are working together toward a brighter future for the Indo-Pacific. The United States In India, along with a dozen other Indo-Pacific partners, pushing to expand our region's prosperity for the Indo-Pacific Economic framework," Austin said during his opening remarks.

Responding to it, Jaishankar said, "The ripple impact of our defence cooperation, I think, has a larger beneficiary implication. So for me, our meeting today and my presence here today I do share with you that the global situation today has become far more challenging for a variety of reasons.""Indo-Pacific in particular, it's important that the stability, security and prosperity of the Indo-Pacific should be secured, which is best done amongst others by cooperation between our two countries," he added.

Referring to QUAD- the strategic coalition of leading Indo-Pacific democracies comprising India, Australia, Japan and the US, Austin underscored the current concerns over maritime security in Taiwan and Indo-Pacific.

"Through our(US and India) deepening cooperation with Japan and Australia, we are delivering on the issues that matter most to the region, from entering infrastructure development to maritime security. Sustaining the region security is especially important in recent months, we have seen the PRC intensify its efforts to challenge the rules-based international court from its unprecedented provocations in the Taiwan Strait to its actions," Austin said as he hosted an honour cordon and welcomed Dr S Jaishankar to the Pentagon.

Austin also lambasted China for supporting Russia's invasion in Ukraine and said, "China (Peoples Republic of China) continues to support Russia amid its unprovoked and cruel invasion. So we face sustained challenges to peace, security and prosperity in the region and beyond."While giving assurance to Jaishankar for US commitment, said "But they only reaffirm the importance of our partnership. So as a minister, I'm grateful for your friendship. And we work together toward our shared vision of a free and open Indo-Pacific. And I look forward to a great discussion."During the opening remarks in Washington, the Pentagon Chief also recalled his recent call with Defense Minister Rajnath Singh and said that the defence partnership between India and the US is going strong and strength to strength.

"I'm delighted to host you at the Pentagon today, especially following my recent call with Defense Minister Rajnath Singh. These conversations reinforce a growing threat and ambition of our partnership. And that partnership is moving from strength to strength. Today, we are positioning the US and Indian militaries to operate and coordinate more closely together than ever," he said.

Rajnath Singh conveyed India's concerns related to the American sustenance package for Pakistan's F-16 fleet to Austin in a telephonic conversation in which the two leaders discussed the growing convergence of strategic interests and enhanced cooperation.

Austin said that both the democracies have been taking sufficient and significant steps to deepen the "defense cooperation from stronger information sharing and defense industrial ties to cooperation in emerging defense domains, including through the launch of a new dialogue later this year."Reversing the decision of the previous Donald Trump administration, the Biden Administration has approved a whooping USD 450 million F-16 fighter jet fleet sustainment programme for Pakistan.

Notably, External Affairs Minister, Dr S Jaishankar, was welcomed by US Secretary of Defense Lloyd Austin to the Pentagon in an enhanced honor cordon ceremony on Thursday.

This meeting comes a day before Jaishankar meets his US counterpart Sec Anthony Blinken.

Jaishankar on Saturday concluded the high-level United Nations General Assembly debate in New York. The EAM was in New York from September 18 to 24,In Washington, Jaishankar is expected to meet US Secretary of State Antony Blinken and other senior officials of the Biden Administration. A round table focused on science and technology is also on the agenda for Washington. (ANI)