Taiwan president pledges to engage with world despite Beijing's threats 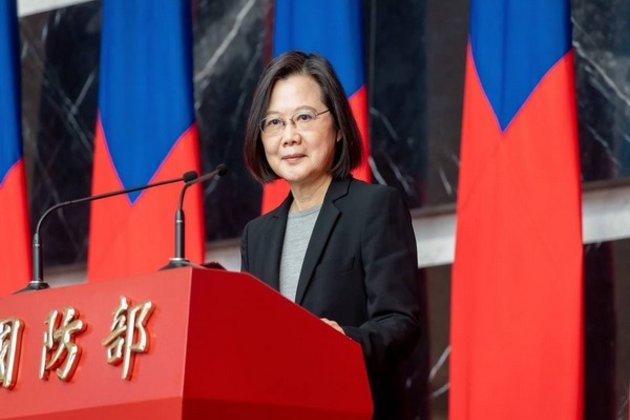 "I want to emphasize that neither threats nor coercion will shake Taiwan's resolve to engage with the world," Tsai said in her video speech delivered at the closing of the 26th Forum 2000 Conference, an annual event held in a hybrid format in Prague from August 31-September 2.

"Taiwan and its people stand ready to step up cooperation with democracies in areas where we can be helpful," said the president, who has been invited to address the forum since 2020.

In her speech, Tsai thanked the Forum 2000 Foundation Executive Director Jakub Klepal and his colleagues at the organization for their staunch support for Taiwan's democracy, Focus Taiwan reported.

Last month when Beijing announced "punitive measures" against the Taiwan Foundation for Democracy, a government-affiliated organization, the Forum 2000 Foundation was the first to condemn China for intensifying attacks on human rights and freedoms in Taiwan, according to Tsai.

The Taiwanese President expressed her appreciation to the Foundation for moving up the date of this year's conference from October due to Russia's unprovoked invasion of Ukraine.

"As the Ukrainian people bravely defend their country, democracy advocates worldwide know that time is of the essence," Tsai said.

"There is a dire need for democrats to come together to counter the resurgence of authoritarianism, and to make democracies more resilient in this increasingly challenging environment," she added.

Citing a number of examples of democratic countries giving support to Taiwan over the years, by speaking out for its international participation or visiting and working with Taiwan, Tsai said these actions "deeply moved the Taiwanese people."She expressed gratitude to friends of Taiwan from across Europe, particularly Lithuania, Slovakia, the Czech Republic and Poland, for coming to its aid during a critical time.

"The people of Taiwan will never forget your kindness and will return this generosity in due time," Tsai said.

Meanwhile, Taiwan's Minister of Foreign Affairs Joseph Wu also spoke at a panel discussion at the conference about Taiwan's defence after the invasion of Ukraine.

According to a news release issued by the ministry on Friday, Wu said Taiwan will continue to develop asymmetric warfare to strengthen its defence capability.

A lesson the world has learned from Russia's invasion of Ukraine was that a country would not be able to deter an attack from an authoritarian regime if it does not have sufficient military power, Wu added.

The tensions between China and Taiwan heightened after the visit of US lawmakers to the self-governed island.

The visit by Pelosi became the highest-ranking US official to touch down on the island in 25 years, was cited by Beijing as the trigger for several days of large-scale military exercises in which China fired missiles over Taiwan and several Chinese warplanes breached Taiwan's air defence identification zone.

Ever since the visit of the US delegation, Beijing launched large-scale military exercises in the vicinity of the island, which included live-fire drills and military aircraft overflights close to Taiwan's airspace.

Post Pelosi's visit, a US delegation, then Indiana Governor Eric Holcomb and then US Senator Marsha Blackburn also visited Taiwan, which irked China.

Amid heightened cross-strait tensions, China yesterday opposed the newly approved USD 1.1 billion US arms sale package to Taiwan and said that it will take necessary countermeasures.

China's ruling Chinese Communist Party (CCP) views Taiwan as part of its territory, despite having never controlled it, and has long vowed to "reunify" the island with the Chinese mainland, by force if necessary. (ANI)

SYDNEY, NSW, Australia - Stocks in Asia plummeted on Wednesday as the U.S. dollar continued to surge.Fears of higher interest ...