Abe to Be Remembered for Staunch US Alliance, Counterweight to China 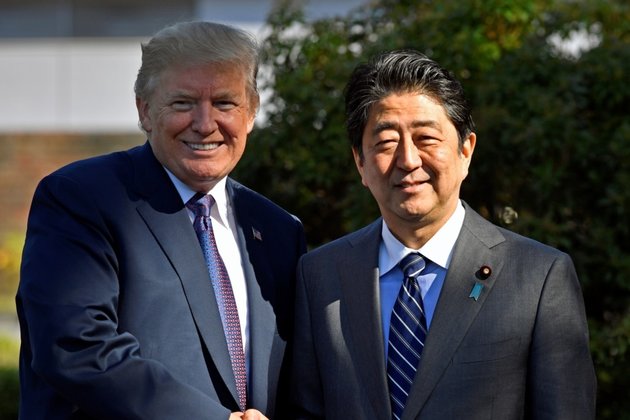 Abe, Japan's longest-serving prime minister, died Friday after being shot earlier in the day during a campaign rally in the Japanese city of Nara.

The conservative leader stepped down in August 2020 after serving a combined nine years as prime minister. He remained active in politics, especially as a voice in the ruling Liberal Democratic Party.

Abe was known for ambitious foreign policies that bound Tokyo closer to Washington and U.S. allies in the Asia-Pacific region, analysts said.

Abe cemented relations with the United States, a Japanese treaty ally since 1951, including through a meeting with former U.S. President Donald Trump just after Trump took office in 2017, Horiba said.

He went on to foster Japanese and U.S. ties with Australia and India to counter the rise of China, said Jeffrey Kingston, history instructor at the Japan campus of Temple University. Abe had advocated free international use of the Indo-Pacific, in part by preparing to export arms to Vietnam and the Philippines. Both Southeast Asian countries contest tracts of the South China Sea with Beijing.

China, a former Cold War foe of the United States, has enlarged its naval fleet during the past decade, expanding into the near seas and into the South Pacific.

"What he did do was strengthen relationships with the United States, shored up the alliance," Kingston said. "He did tout his vision of a free and open Indo-Pacific, he did advocate for cooperation between the U.S., Japan, Australia and India, and he also forged security partnerships around the region - all in response to anxieties about Chinese regional hegemonic ambitions."

Abe became such a strong voice that his successor, Fumio Kishida, all but must uphold Japan's pro-U.S. policy, said Wang Wei-chieh, a Taiwanese university student and co-founder of the FBC2E International Affairs Facebook page.

"I think their Indo-Pacific strategy won't have significant change even if Abe dies because I think they've set a direction," he said before the death was announced. "They already initiated a strategy."

His death would silence a strong pro-Taiwan voice, Wang added. Abe and Kishida had openly backed U.S. statements of potential military support for Taiwan, a self-ruled island claimed by China.

Abe, despite regular meetings with foreign officials, met little success in improving relations with China, Russia or South Korea, Kingston said. Japan and Russia still dispute sovereignty over some of the Kuril Islands, he said, although Abe had met Russian President Vladimir Putin more than once.

Abe advocated as well for Japan to revise its pacifist constitution, which was drafted by U.S.-led Allied forces occupying the country after the war. That ambition riled Japan's Asian neighbors as well as some war-wary Japanese. Domestic opposition had cooled the idea down by 2019.

Abe's "Abenomics" strategy of revitalizing a flat economy through more spending and a bigger money supply worked at the start but eventually ran up against debts, Kingston said.

Abe inevitably ran into "controversy" because he served for so long as prime minister, Horiba said.