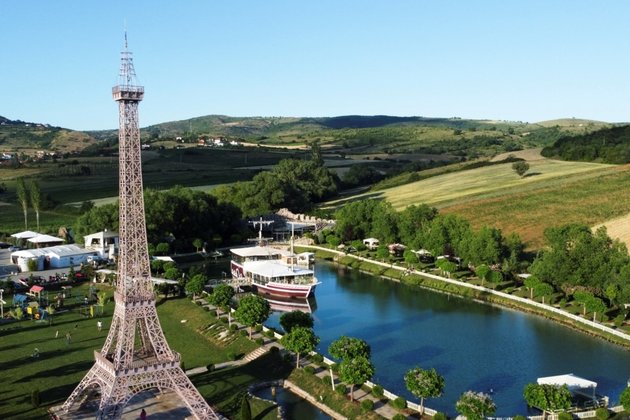 In Kosovo, which has been waiting for visa-free travel to the European Union since 2010, a restaurant owner has erected a large replica of France's famed Eiffel Tower for its diners.

'We have built it as a form of consolation for the people who cannot go to Paris,' said Blerim Bislimi, owner of Te Anija (At The Boat) restaurant on the edge of the capital Pristina.

The joke reflects a wider malaise across the Balkans about the prospects of its six members - Albania, Bosnia, Kosovo, Montenegro, North Macedonia and Serbia - ever joining the EU.

A lack of progress on milestones such as visa-free travel along the way has lead to such a sense of disillusion that the leaders of Albania and Serbia briefly considered not attending Thursday's Balkan-EU summit in Brussels.

Albanian Prime Minister Edi Rama and Serbian President Aleksandar Vucic said on Wednesday they will now go, but Rama expressed his despondency on Twitter: 'We'll attend the EU Council meeting. There won't be much to hear about.'

In Serbia, the largest country in the region, enthusiasm for EU membership has declined so much that now 44% of people are against it and only 35% in favor, with the remainder unsure, according to an Ipsos poll in April.

A draft of the summit statement seen by Reuters showed that EU leaders will again give 'full and unequivocal commitment to the EU membership perspective of the Western Balkans.'

But Ukraine's fast-tracked progress to formal candidate status, to be agreed at Thursday's summit, has only served to increase their feeling of being sidelined, Balkan countries say, even if all but Bosnia and Kosovo are already EU candidates.

'North Macedonia and Albania have every right to be upset,' said Zvezdana Kovac at the European Movement in Serbia, a non-profit organization pushing for Serbian membership of the EU, referring to the stalled negotiation process.

EU member Bulgaria in 2020 blocked the start of accession talks with North Macedonia over a dispute relating to history and language.

Albania's progress is formally linked by the EU to that of North Macedonia, which already had to agree to settle a decades-long stand-off with Greece over its name to clear its path to EU membership. North Macedonia and Albania earlier had to wait for a green light from France over their track record on democracy and fighting corruption.

EU diplomats do not expect a breakthrough at the summit.

Awarding Ukraine its EU candidacy status without any feasible progress for the Balkans is also a 'bad message' for the region, Kovac said.

There has been no progress on overcoming Bulgaria's veto or wider momentum to help Serbia and Montenegro in their negotiations, which require politically unpopular reforms.

Arton Demhasaj, from the Pristina-based anti-corruption watchdog of Cohu (Wake up), said: 'The European Union has no clear enlargement policies towards the Western Balkans.'

'If countries that aspire to join the EU face delays, they will reorient their policies and then we will have an increase of Russian and Chinese influence in the Western Balkans,' he said.

In contrast to the success of the EU's eastward enlargement drive that transformed former communist countries such as Poland into thriving market democracies, the EU approach now offers too little reward tied to too many conditions, Balkan officials say.

Some EU governments, particularly in France, the Netherlands and Denmark, fear a political backlash in member states over migration from the Balkans and have sought to increase reforms.

'Too many EU governments think we can keep handing the Balkans new demands and say: come back when you're done,' said a senior EU diplomat involved in the talks. 'But it doesn't work like that, at some point they are going to give up.'