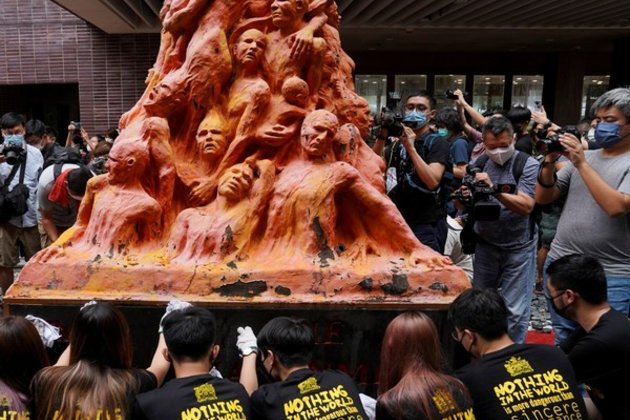 Hong Kong, June 4 (ANI): China is intent on erasing the memories of the Tiananmen Square massacre of 1989 and has banned public commemorations on the 33rd anniversary of the country's most dubious instance of State oppression.

The draconian National Security Law will be used to crack down on anyone showing public dissent or remonstration or organising memorial functions on the occasion.

With all dissent smothered on mainland China, the communist government is focusing its energies on the autonomous region of Hong Kong where it is worried pro-democracy sentiments may surface while remembering the thousands of people who were gunned down by Chinese soldiers following explicit orders of the communist government to disperse a large crowd of students and activists who had gathered at Tiananmen Square in Beijing.

For the first time, even the Catholic church has decided not to provoke the communist police. The Hong Kong Catholic Social Communications Office, the communications department of the Diocese of Hong Kong has announced that there will be no memorial Mass on the massacre's anniversary.

For the last one week, the media covering Hong Kong is unanimous in thinking that they "will see more state-sponsored Chinese oppression against any event to remember the Tiananmen Square event, which exposes Beijing's authoritarian and repressive style of governance".

The government has in the last two years systematically progressed towards cessation of all dissent on the anniversary date of June 4. In 2020 it brought in the draconian security law. Then it said protests are anti-national and would attract the provisions of the security law.

In December 2021, it went a step ahead and removed the 'pillar of shame,' an iconic memorial dedicated to the Tiananmen Square massacre of 1989. The memorial designed by Danish sculptor Jens Galschiot "symbolised the ruthless killings committed by the Chinese Communist Party (CCP) and the Peoples Liberation Army (PLA) in June 1989 when thousands of students gathered in central Beijing demanding political reforms and democracy".

The same month, "the Chinese University of Hong Kong tore down the Goddess of Democracy statue, a replica of the one created by protesters in Beijing during the Tiananmen protests". A museum set up in Hong Kong in memory of the Tiananmen victims was forcibly closed down.

And this year, it has ordered that all dissent shall remain buried. The only opposition to the communist decree is from Taiwan where, according to media reports, "a scaled-down replica of the 'Pillar of Shame' statue honouring the victims of the Tiananmen Square massacre will be unveiled at a commemorative vigil in Taipei, Taiwan on June 4 evening".

In effect, nowhere in China will the massacre be allowed to be remembered on its anniversary this year. Taiwan will be the only exception as it stands up to the anti-democratic orders of the Chinese government.

Over three decades since the mass killing, the day haunts the Communist Party of China. Soldiers of the PLA army ruthlessly killed the Tiananmen Square protesters through a "bloody crackdown after CCP imposed 'martial law' in June 1989 to forcefully end the months-long protest". At least "10,000 civilians, mostly students," were killed by the PLA.

The incident led to internal condemnation of China and till today, the country's claims about respecting human rights is always suspect. The country was virtually isolated by the global community. It shook the communist leadership so much that the then top leader, Deng Xiaoping, used the occasion to purge several party leaders for creating the "chaos". They were the scapegoats. Deng also used the occasion to tighten the CCP's grip over the country.

The CCP tried to protect the Tiananmen protests as the result of provocative actions by "counter-revolutionaries". However, everybody saw through the fake propaganda.Since then, the government has hyped the propaganda in the run-up to every anniversary of the killings. Obviously, the propaganda failed to work and that is probably why the government has in 2022 decided to ban all ceremonies. The government asked the Hong Kong police to issue warnings to residents to desist from organising any memorial functions. It also warned that "sharing social posts" describing their mood on the occasion of the anniversary could be grounds for "incitement".

The police also forced the disbanding of the Hong Kong Alliance in Support of Patriotic Democratic Movements, the original organiser of the Victoria Park vigil. The police started probing whether the Alliance was an "agent of foreign forces", forcing it to disintegrate.

This year's "June 4" - that is what the Tiananmen Square Vigil is known in Hong Kong - will be the first occasion when Hong Kong will fall silent, without any protests or commemoration. That will be the beginning of a new chapter of CCP aggression against the island which, in 1989, played a crucial role in organising the escape for the Tiananmen activists who survived the 1989 massacre. (ANI)