Ukraine recap: bogged down in the bloody Donbas region 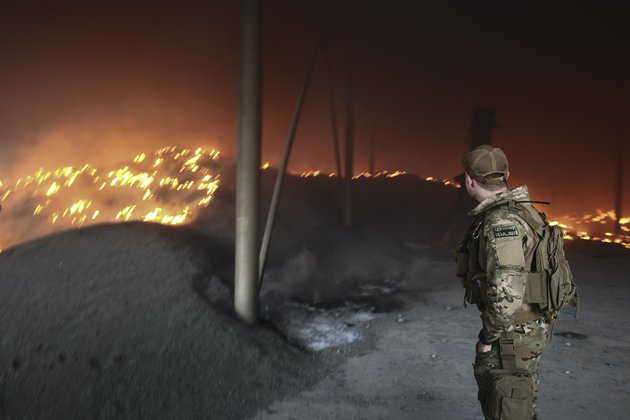 It's now over 14 weeks since Vladimir Putin sent Russia's military machine into Ukraine expecting a relatively easy victory. It's fair to say that the "special military operation" is not panning out the way the Russian president or his planners had envisaged.

The main focus of the fighting continues to be in the Donbas region in the country's east, where Russian territorial gains are being met with a terrible butcher's bill on both sides. Portsmouth University's military strategist, Frank Ledgwidge, says Russia has lost more troops killed since February 24 than in ten years of fighting in Afghanistan - implying that well over 40,000 Russian soldiers have been taken out of the game. Ukraine's casualties, Ledwidge estimates, are also grievous.

Read more: Ukraine war: despite Russia's success in Donbas, this is only the end of the beginning

Ledwidge's regular analysis has so far proved remarkably prescient: you may remember he predicted on day two of the conflict that Ukraine's armed forces would put up stiff resistance and rightly that the battle for the Donbas would be protracted and bloody.

Meanwhile, the first Russian soldier has been convicted in a war crimes trial and sentenced to life imprisonment. Vadim Shishimarin, 21, was sentenced for the killing of a 62-year-old man who was shot in the head in a village in the northeastern Sumy region in the opening days of the war.

This is our weekly recap of expert analysis of the Ukraine conflict. The Conversation, a not-for-profit news group, works with a wide range of academics across its global network to produce evidence-based analysis. Get these recaps in your inbox every Thursday. Subscribe here).

Legal scholar Robert Goldman of American University in Washington - an expert on the law of war - believes that, while Ukraine is entitled to try the young tank commander for the murder, it may not have been wise to pursue the case while the war still rages and in a civilian court. He also cautions that while Ukraine may well have observed due process of law in presenting the prosecution, not that this precedent has been set, there's no guaranteeing Russia will be so scrupulous.

Another big item on the news agenda at the moment is the cost of living crisis, and war in Ukraine is exacerbating that considerably. The sharp increase in oil and gas prices, as well as riding food prices and shortage, can all - at least in part - be attributed to Putin's war.

Birmingham University's Stefan Wolff and his collaborator Tatyana Malyarenko of the National University of Odesa have taken a detailed look at the economic fallout from the conflict and how this is likely to play into global political instability. One largely unforeseen consequence, they write, is the way this is affecting the US relationship with China - which will bear watching in the weeks and months ahead.

One aspect of China-US relations in the news this week has involved the US stance on Taiwan. US president Joe Biden appeared to be rewriting America's policy of "strategic ambiguity", when he made a recent pledge to the effect that the US would take military action to defend Taiwan if China launched an invasion. Russia's invasion has, as you'd expect, focused White House minds on the possibility that this might indeed come to pass.

Christoph Bluth and Owen Greene, international relations experts at the University of Bradford, believe that in the event of a Chinese invasion of Taiwan, the US will face a completely different set of challenges to those posed by Putin's aggression in Ukraine.

Read more: How Ukraine war could boost tensions between US and China over future of Taiwan

Closer to home, meanwhile, there has been a spate of intense diplomatic activity sparked by Russia's aggression. The last Ukraine recap focused on the decision of Finland and Sweden to seek membership of Nato, and this week Owen Greene has taken a closer look at the history of Swedish neutrality since the Napoleonic wars. This stance began to change after Russia annexed the Crimea when the country began to seek closer defence cooperation with its neighbours and, through Nato members Denmark and Norway, with the North Atlantic alliance itself.

Read more: Sweden: a history of neutrality ends after 200 years

Denmark is also examining its defensive alliances and is voting on whether to end its opt-out from the European Union's defence policy. It's a significant move, as the EU has been bolstering its own defensive capabilities of late, so a vote in favour of ending the opt-out - according to Imelda Maher of University College Dublin and Dermot Hodson of Birkbeck, University of London - would accelerate that growth.

Read more: Why Denmark is voting on its defence relationship with the EU - and what it says about democracy in Europe

Just a few months ago, the European Space Agency (Esa) was preparing for the launch of the Rosalind Franklin rover on its trip to Mars, part of the ExoMars mission, a collaboration between Europe and Russia. Russia was to have provided several key components of the mission, including a rocket to launch it on its journey and the radioactive heaters to keep the batteries of the rover warm in the cold Martian nights.

Now, says space scientist Andrew Coates of University College London, Esa will need to find new partners for the mission. If this turns out to be Nasa, as is widely thought, this will further widen Russia's rift with the west.

Read more: Our Mars rover mission was suspended because of the Ukraine war - here's what we're hoping for next

And finally, while you will have seen Russian and Belarus tennis stars competing in the French Open this week, you won't be seeing these top players at Wimbledon, which has banned all competitors from the two countries. The likes of men's world number two Daniil Medvedev, men's number eight Andrey Rublev, and Belarusian former women's world number two Aryna Sabalenka have been allowed to play as individuals rather than representing their respective countries.

As Leon Davis of Teeside University and Mike Duignan of the University of Surrey - both experts in event management - observe here, any of these players who openly express support for the Russian invasion will face sanctions and many of them have won plaudits for openly opposing the war. But, caution Davis and Duignan, even those Russian and Belarusian players who don't actually live in their birth country any more are likely to have families there who could be endangered if they are too outspoken against the invasion.

Ukraine Recap is available as a weekly email newsletter. Click here to get our recaps directly in your inbox.)