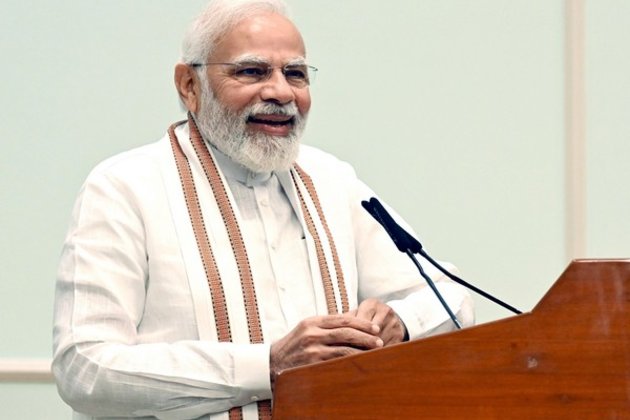 "During my recent visit to Japan, I met some wonderful personalities of Japan who have immense love for India. One of them is Hiroshi Koike, an art director, who directed the 'Mahabharat Project'," mentioned PM Modi.

He further stated that this project was started in Cambodia and it is continuing for the last nine years. "Hiroshi Koike performs every task in a very different way. Every year, he travels to one country in Asia and produces parts of the Mahabharata with local artists and musicians there," said PM Modi.

PM Modi said that through this project, Koike has done productions and given stage performances in nine countries, including India, Cambodia and Indonesia.

"Hiroshi Koike brings together artists who have had a diverse background in Classical and Traditional Asian Performing Art. Because of that, different hues are seen in his work. Performers from Indonesia, Thailand, Malaysia and Japan make it more attractive through Java dance, Balinese dance, Thai dance. The special thing is that in this each performer speaks in his own mother tongue and the choreography very beautifully displays this diversity and the diversity of music makes this production more lively," said the Prime minister.

He said that the aim of their performance is to bring to the fore the importance of diversity and co-existence in society and what peace should really be like.

Besides them, PM Modi also mentioned Atsushi Matsuo and Kenji Yoshi, who are from TEM Production Company, which is associated with the Japanese Animation Film based on Ramayana that was released in 1993. This project was associated with Japan's very famous film director Yugo Sako.

"About 40 years ago, in 1983, they came to know about Ramayana for the first time. 'Ramayana' touched his heart, after which he started researching deeply on it. Not only that, they also read 10 versions of Ramayana in the Japanese language, and he did not stop at this, as he also wanted to showcase it through animation," he said.

He said that Indian animators also helped them in making of the film.

"In this, Indian animators also helped him a lot. He was guided about the Indian customs and traditions shown in the film. He was told how people in India wear dhoti, how they wear saree, how they groom their hair... How children respect each other within the family, what the tradition of blessing is! Waking up in the morning, offering salutation to the elders of the household, seeking their blessings - all these things!" he added.

The Prime Minister said the animation film is being made again and is likely to be completed soon.

"People living thousands of kilometers away from us in Japan, who don't know our language, who don't know much about our traditions, their dedication to our culture, this reverence, this respect, is very commendable - which Indian would not be proud of that!" he added.