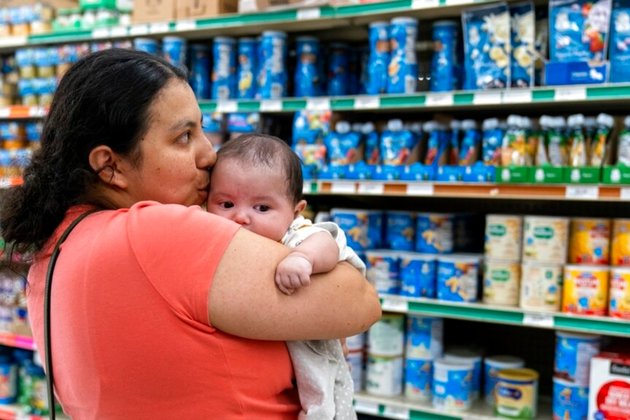 COLUMBIA, Maryland - Capri Isidoro broke down in tears in the office of a lactation consultant.

The mother of two had been struggling to breastfeed her 1-month-old daughter ever since she was born, when the hospital gave the baby formula first without consulting her on her desire to breastfeed.

Now, with massive safety recall and supply disruptions causing formula shortages across the United States, she also can't find the specific formula that helps with her baby's gas pains.

'It is so sad. It shouldn't be like this,' said Isidoro, who lives in the Baltimore suburb of Ellicott City. 'We need formula for our kid, and where is this formula going to come from?'

As parents across the United States struggle to find formula to feed their children, the pain is particularly acute among Black and Hispanic women. Black women have historically faced obstacles to breastfeeding, including a lack of lactation support in the hospital, more pressure to formula feed and cultural roadblocks. It's one of many inequalities for Black mothers : They are far more likely to die from pregnancy complications, and less likely to have their concerns about pain taken seriously by doctors. 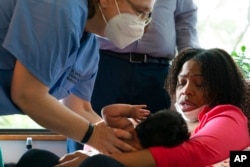 Capri Isidoro is handed her one-month-old baby Charlotte, as Ann Faust, an International Board Certified Lactation Consultant, weighed the baby after Isidoro breastfed her, as part of a lactation consultation in Columbia, Md., May 23, 2022.

Low-income families buy the majority of formula in the U.S., and face a particular struggle: Experts fear small neighborhood grocery stores that serve these vulnerable populations are not replenishing as much as larger retail stores, leaving some of these families without the resources or means to hunt for formula.

The Centers for Disease Control and Prevention estimates that 20% of Black women and 23% of Hispanic women exclusively breastfeed through six months, compared to 29% of white women. The overall rate stands at 26%. Hospitals that encourage breastfeeding and overall lactation support are less prevalent in Black neighborhoods, according to the CDC.

The Association of Women's Health, Obstetric and Neonatal Nurses also says Hispanic and Black women classified as low-wage workers have less access to lactation support in their workplaces.

The racial disparities reach far back in America's history. The demands of slave labor prevented mothers from nursing their children, and slave owners separated mothers from their own babies to have them serve as wet nurses, breastfeeding other women's children. 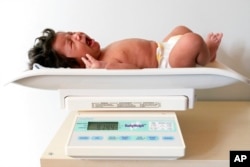 One-month-old baby Charlotte is weighed before attempting to breastfeed, during a lactation consultation in Columbia, Md., May 23, 2022.

In the 1950s, racially targeted commercials falsely advertised formula as a superior source of nutrition for infants. And studies continue to show that the babies of Black mothers are more likely to be introduced to formula in the hospital than the babies of white mothers, which happened to Isidoro after her emergency cesarean section.

Physicians say introducing formula means the baby will require fewer feedings from the mother, decreasing the milk supply as the breast is not stimulated enough to produce.

Andrea Freeman, author of the book 'Skimmed: Breastfeeding, Race and Injustice,' said these mothers still aren't getting the support they need when it comes to having the choice of whether to breastfeed or use formula. They also may have jobs that do not accommodate the time and space needed for breastfeeding or pumping milk, Freeman said.

'Nobody's taking responsibility for the fact that they've steered families of color toward formula for so many years and made people rely on it and taken away choice. And then when it falls apart, there's not really any recognition or accountability,' Freeman said.

Breastfeeding practices are often influenced by previous generations, with some studies suggesting better outcomes for mothers who were breastfed when they were babies.

Kate Bauer, an associate professor of nutritional sciences at the University of Michigan School of Public Health, said she began hearing back in February about Black and Latino families in Detroit and Grand Rapids feeling stuck after finding smaller grocery stores running out of formula.

Some were told to go to the local office of the Special Supplemental Nutrition Program for Women, Infants, and Children, better known as WIC, the federal program that supports low-income expectant and new mothers. Between 50% and 65% of the formula in the U.S. is bought through the program.

'Going to the WIC office is like a full day's errand for some moms,' Bauer said.

She fears mothers are getting desperate enough to try foods that are not recommended for babies under 6 months.

Yury Navas, a Salvadoran immigrant who works at a restaurant and lives in Laurel, Maryland, says she was not able to produce enough breast milk and struggled to find the right formula for her nearly 3-month-old baby Jose Ismael, after others caused vomiting, diarrhea and discomfort. 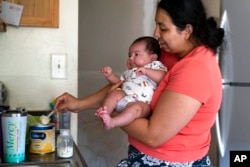 Yury Navas, 29, of Laurel, Md., scoops formula to make a bottle for her infant son, Jose Ismael Gálvez, 2 months, from her dwindling supply of formula at their apartment in Laurel, Md., May 23, 2022.

One time, they drove half an hour to a store where workers told them they had the type she needed, but it was gone when they got there. Her husband goes out every night to search pharmacies around midnight.

'It's so hard to find this type,' she said, adding they sometimes have run out before they can secure more formula. 'The baby will cry and cry, so we give him rice water.'

On a recent day, she was down to her last container and called an advocacy group that had told her it would try to get her some at an appointment in five days. But the group could not guarantee anything.

Some mothers have turned to social media and even befriended other locals to cast a wider net during shopping trips.

In Miami, Denise Castro, who owns a construction company, started a virtual group to support new moms during the COVID-19 pandemic. Now it's helping moms get the formula they need as they go back to work. One of them is a Hispanic teacher whose job leaves her with little flexibility to care for her 2-month-old infant, who has been sensitive to a lot of formula brands.

'Most of the moms we have been helping are Black and Latinas,' Castro said. 'These moms really don't have the time to visit three to four places in their lunch hour.' Lisette Fernandez, a 34-year-old Cuban American first-time mother of twins, has relied on friends and family to find the liquid 2-ounce bottles she needs for her boy and girl. Earlier this week, her father went to four different pharmacies before he was able to get her some boxes with the tiny bottles. They run out quickly as the babies grow.

Fernandez said she wasn't able to initiate breastfeeding, trying with an electric pump but saying she produced very little. Her mother, who arrived in Miami from Cuba as a 7-year-old girl, had chosen not to breastfeed her children, saying she did not want to, and taken medication to suppress lactation.

Some studies have attributed changes in breastfeeding behavior among Hispanics to assimilation, saying Latina immigrants perceive formula feeding as an American practice.

'Over the last three to six weeks it has been insane,' Fernandez said. 'I am used to everything that COVID has brought. But worrying about my children not having milk? I did not see that coming.'