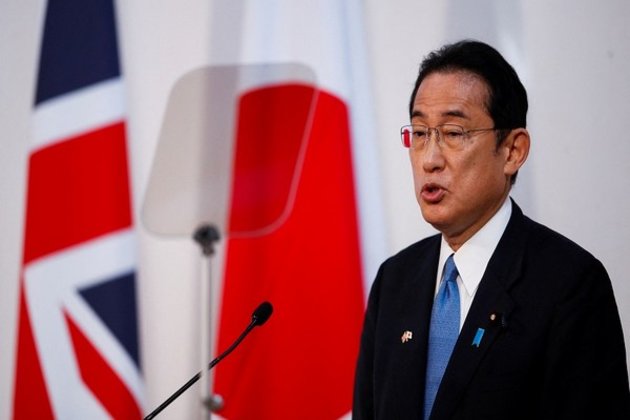 London [UK], May 7 (ANI): Japanese Prime Minister Fumio Kishida warned that the invasion of Ukraine could be replicated in Taiwan by China if leading powers do not respond as one.

Speaking through a translator at a meeting in London, Kishida said that the ongoing Russian invasion of Ukraine has raised concerns that China might take advantage of the West's military commitments in Eastern Europe to launch a simultaneous move against Taipei, reported Trevor Filseth, writing in The National Interest.

He said that Russia's invasion of Ukraine might presage similar events in Taiwan unless Japan and its Indo-Pacific allies respond to a crisis on the self-governing island in a unified manner.

Kishida argued that the "Group of Seven" (G7) nations--consisting of Japan, the United States, Canada, the United Kingdom, France, Italy, and Germany--needed to establish a clear commitment to unity in Asian affairs.

"We must collaborate with our allies and like-minded countries, and never tolerate a unilateral attempt to change the status quo by the use of force in the Indo-Pacific, especially in East Asia," he added.

"Peace and stability in the Taiwan Strait is critical not only for Japan's security but also for the stability of international society," he continued.

"Japan maintains its position to expect a peaceful resolution through dialogue to issues surrounding Taiwan ... and the situation will be watched carefully from that perspective," said the Japanese PM.

Taiwan has been claimed by the government of mainland China since 1949, although the government in Beijing, led by the Chinese Communist Party, has never exercised control over Taiwan.

In recent years, Chinese leaders have repeatedly insisted that Beijing would gain control over the island in the coming decade, although President Xi Jinping has argued in the past that peaceful reunification, rather than conquest, is the course of action "most in line with the overall interest of the Chinese nation."The ongoing Russian invasion of Ukraine--which began on February 24, four days after the end of the Beijing Winter Olympics--has raised concerns in Western capitals that China might take advantage of the West's military commitments in Eastern Europe to launch a simultaneous move against Taipei, wrote Filseth.

Consequently, the Taiwanese government has raised its alert level, although there have been no signs of Chinese activity that would indicate an imminent invasion. (ANI)