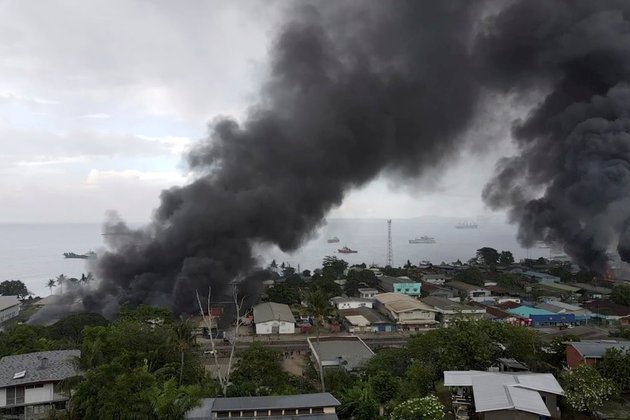 The Solomon Islands has accepted an offer from Beijing to help shut down riots in the country, which have included arson attacks and looting since civil unrest broke out in November.

In a statement on Thursday, the Solomon Islands government announced that it had accepted China's "offer of riot equipment and six Police Liaison Officers to equip and train Royal Solomon Islands Police Force."

The government said China's assistance would complement aid received from other countries, such as Australia, New Zealand, Fiji, and Papua New Guinea - which it thanked in the same statement.

Unnamed Australian defense and diplomatic sources told ABC News there were concerns that the Chinese aid would result in further assistance being sought from Beijing in the future.

Though 73 Australian Federal Police officers and 43 Australian Defense Force soldiers were deployed to the Solomon Islands last month, rioting in the country continues.

The riots were partially motivated by the government's 2019 decision to sever ties with Taiwan in favor of Beijing. Last month, Solomon Islands Prime Minister Manasseh Sogavare suggested that anti-China riots had been incited from abroad, though he refused to name the culprit.

Chinese Foreign Ministry spokesman Zhao Lijian said on Thursday that China's aid would "arrive in Solomon Islands soon and are expected to play a constructive role in enhancing the ability of the Solomon Islands police."

"China firmly supports the government of Solomon Islands in defending the country's stability, resolutely safeguards the relations between China and Solomon Islands and the legitimate rights and interests of Chinese citizens there, and strongly condemns any illegal and violent action," the spokesman continued.

Australia's Department of Foreign Affairs and Trade (DFAT) said it was aware of China's assistance, calling it "a matter for the Solomon Islands government."