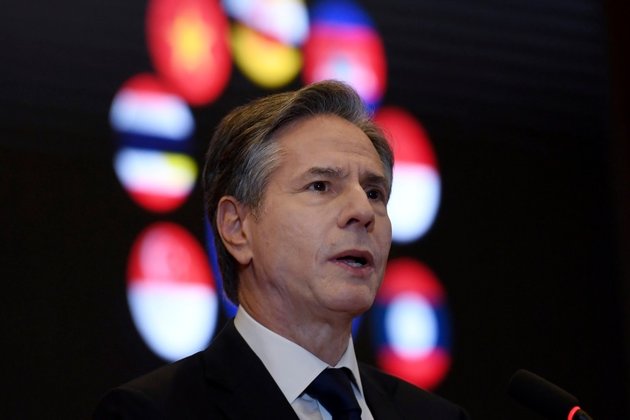 U.S. Secretary of State Antony Blinken said Tuesday the United States would work with allies to defend and promote a free and open Indo-Pacific region.

Speaking during a visit to Indonesia, Blinken said the greatest strength against evolving threats is working with other nations, and that the U.S. wants to ensure people and countries have the freedom to decide on their own futures and partners.

"We'll adopt a strategy that more closely weaves together all our instruments of national power - diplomacy, military, intelligence - with those of our allies and partners,' he said.

Blinken reiterated U.S. commitment to freedom of navigation in the South China Sea, an area where he said China's actions threaten the movement of $3 trillion in goods annually.

"That's why there's so much concern from Northeast Asia to Southeast Asia and from the Mekong River to the Pacific Islands about Beijing's aggressive actions claiming open seas as their own, distorting open markets through subsidies to its state-run companies, denying the exports or revoking deals for countries whose policies it does not agree with," Blinken said. "Engaging in illegal, unreported and unregulated fishing activities. Countries across the region want this behavior to change. We do, too."

China competes with Brunei, Malaysia, the Philippines, Taiwan and Vietnam for sovereignty over parts of the resource-rich sea, which stretches from Hong Kong to Borneo.

Last month, China pledged to avoid dominance in the South China Sea, but experts said the pledge comes too late to convince smaller Southeast Asian claimants to the strategic waterway after years of Chinese expansion.

Blinken said "defending the rules-based order is not to keep any country down," and that the United States does not seek conflict in the region.

He also discussed efforts to promote fair trade in the Indo-Pacific, to address infrastructure shortcomings that challenge inclusive growth, the need to build resilience to tackle challenges such as the COVID-19 pandemic and addressing climate change by investing in new types of jobs.

Some information for this report came from the Associated Press, Agence France-Presse and Reuters.