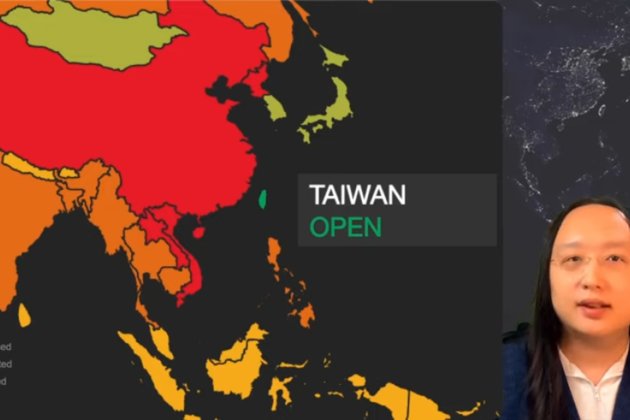 The White House reportedly ordered that a Taiwanese minister's video feed be cut during the US-led ?Summit for Democracy? last week, after her presentation featured a map that marked the island in a different color to China.

The slideshow by Taiwanese Digital Minister Audrey Tang during a panel discussion on Friday caused some concern among US officials, unnamed sources familiar with the incident told Reuters. The map was visible during Tang's remarks for about a minute before the video connection was interrupted - allegedly at the White House's bidding - and replaced by audio only.

The color-coded map, reportedly from South African NGO CIVICUS, illustrated a ranking of countries by openness on civil rights. Taiwan was colored green for 'open', while other Asian nations, including several US allies and China, were highlighted in red and labeled as being 'closed'. The slide was apparently not part of a dry-run of the presentation prior to the summit.

According to one source, the map instantly prompted an email flurry among US officials, with the White House National Security Council (NSC) raising concerns about whether it was an attempt at intentional messaging by Taiwan. Washington also apparently complained to Taiwan's government, which in turn expressed anger about the interruption.

Describing the incident as "an internal overreaction," another person involved in the conference told Reuters that it clearly reflected "policy concerns." Both sources said the Biden administration was worried that the issue could be viewed as the US taking a position on whether Taiwan was a part of China and suggested that its support for Taiwan was not "rock solid."

However, an NSC spokesman called the Reuters report "inaccurate" and denied that the White House directed Tang's video feed to be cut. In an email to the news outlet, the spokesman blamed the issue on confusion over screen-sharing and noted that the full video was available on the summit's web page.

The State Department also told Reuters it was an "honest mistake" resulting from screen-sharing "confusion." Likewise, Taiwan's Foreign Ministry blamed "technical problems" and said Tang's presentation had been shared in advance and not included at the last minute.

Meanwhile, Tang told the outlet she did not believe the incident had "anything to do with the CIVICUS map in my slides, or US allies in Asia for that matter."