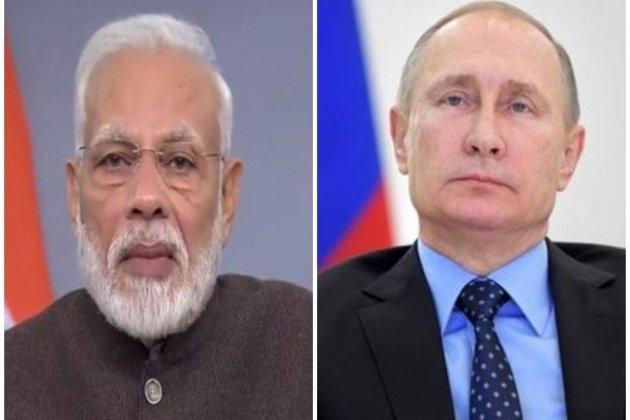 New Delhi [India], December 5 (ANI): As India prepares to host Russian President Vladimir Putin for the annual India-Russia summit, New Delhi's time-tested and all-weather partnership with Moscow is back in the limelight.

This will be the first in-person meeting between Prime Minister Narendra Modi and President Putin after their meeting on the sidelines of the BRICS summit in Brasilia in November 2019.

Putin decided to go ahead with the visit despite the emergence of a new COVID-19 strain Omicron which has affected the schedule of several bilateral and international summits.

During the summit, PM Modi and the Russian President will review the prospects of bilateral relations and will discuss ways to further strengthen the strategic partnership between the two countries.

Putin's visit assumes great significance as some analysts are questioning the future of India-Russia ties due to the improved Russian relations with China and Pakistan. Other experts have highlighted how India's growing engagements with the US could prove to be an impediment to the time-tested partnership with Moscow.

Andrew Korybko, an American Moscow-based political analyst, told ANI that Moscow respects New Delhi's right to clinch whatever partnerships it wants with other countries but it expects that they won't be directed against any third countries.

Korybko said that enhanced partnership with Russia helps India recalibrate its multi-alignment policy towards Eurasia "after it tilted heavily towards the Indo-Pacific in recent years".

"Against the context of US-Russian tensions and especially the US' threats to sanction India under CAATSA for purchasing Russia's S-400 air defence systems, this shows that the historical Russian-Indian axis - which is among the most enduring in the modern era - remains strong and isn't affected by third parties' pressure," he told ANI in an email interview.

Asked if Moscow is concerned about India's increasing engagement with the US, Korybko said "Russia respects India's right to clinch whatever partnerships it wants with third countries, but it expects that they won't be directed against any third countries".

Furthermore, Korybko said Putin will likely seek to further diversify the special and privileged strategic partnership away from its military-industrial focus and towards more economic, technological, and integrative directions.

"In particular, this could see some deals signed for Russian companies to invest more in India, further technological cooperation (including on vaccines), and more progress on the and especially the VCMC. Basically, this visit will try to take their historical partnership to the next level, helping it evolve with the times and remain an axis of stability and certainty in Eurasia," he said.

The annual summit is a time for both leaders to recalibrate the long-standing relationship. Experts believe that both countries understand the importance of mutual cooperation and continued coordination at the world stage, despite the few hurdles that may arise from time to time. (ANI)