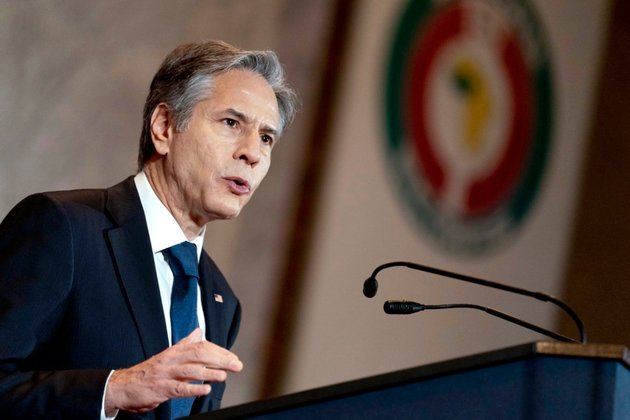 STATE DEPARTMENT - Here's a look at what U.S. Secretary of State Antony Blinken and other top diplomats have been doing the week of November 23-December 1:

Blinken said Wednesday that Russia appears to be planning to take military action against neighboring Ukraine. He warned Moscow of consequences if it moved forward with acts of aggression. At a news conference in Riga, Latvia, after meeting with NATO foreign ministers, Blinken said that the U.S. was 'deeply concerned by evidence that Russia has made plans for significant aggressive moves against Ukraine, plans (that) include efforts to destabilize Ukraine from within, as well as large-scale military operations.'

U.S. Deputy Secretary of State Wendy Sherman and European External Action Service Secretary-General Stefano Sannino are scheduled to hold the second session of the U.S.-EU Dialogue on China on Thursday and high-level consultations on the Indo-Pacific earlier in the day on Friday.

A senior State Department official told reporters during a background briefing that the U.S. and European Union share concerns about China's economic coercion and an unfair level playing field due to China's state-owned enterprises.

'Taiwan will be a topic of discussion in the (U.S.-EU) dialogue,' said the senior official, who added that Taiwan and Lithuania have deepened their cooperation through the opening of Taiwan's representative office in Vilnius and Lithuania's plans to open a reciprocal office in Taipei.

The U.S. State Department has announced new visa restrictions on Cuban officials, linked to what Washington says is Havana's ongoing repression of opposition voices in the small Caribbean nation.

In a statement on Tuesday, Blinken said nine high-ranking officials from Cuba's Interior Ministry and armed forces are no longer welcome in the United States because they were 'implicated in attempts to silence' journalists as well as activists gathering earlier this month for pro-democracy protests.

The United States said it is greatly concerned about Ethiopia's military escalation and called for urgent negotiations.

'Secretary Blinken expressed grave concern about worrying signs of military escalation in Ethiopia and emphasized the need to urgently move to negotiations,' the State Department said in a statement hours after Ethiopian Prime Minister Abiy Ahmed appeared on the front line with the national army.

The United States has removed a former Colombian Marxist rebel group from a list of foreign terrorist organizations. Blinken said in a statement on Tuesday that the move came five years after a U.S.-Colombia agreement 'formally dissolved and disarmed' the Revolutionary Armed Forces of Colombia, known as FARC.

U.S. Special Representative for Afghanistan Thomas West told VOA in an exclusive interview on November 23 that the United States is 'extremely concerned about the worsening humanitarian crisis in Afghanistan,' adding that the country was suffering such a crisis before the Taliban's military takeover in August.

When asked whether the U.S. would follow suit if other members in the Troika Plus group (U.S., Russia, China, Pakistan) were to move ahead to formally recognize the Taliban, West said, 'I do not see moves by Russia and China, in particular, to recognize the Taliban. I think the Pakistanis are engaging more actively and in a more forward-leaning manner than certainly we are comfortable engaging at the moment. But the answer to your question, since it's a hypothetical, is no.'