PM Morrison: The skipper who won't play with a straight bat 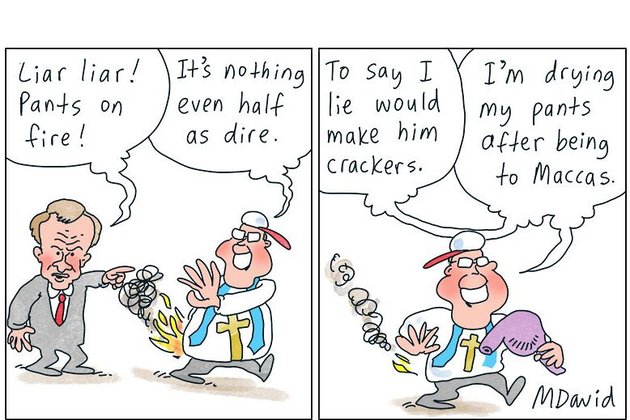 With the PM's ploy of reducing some debate to a cricket analogy, Scott Morrison, the "king of spin", has rebranded being called a liar to make it seem like only a bit of sledging, writes Geoffrey Dyer.

OH, CAPTAIN! My captain! Did you slip the knife into skipper Turnbull before picking up the willow and strolling to the crease? Did you then hand Senator Bridget McKenzie the sandpaper to help with the spin and a packet of coloured pencils to highlight your favourite sporting teams? Were you complicit in defunding the umpire (Auditor-General) when he raised his finger to the skies - just like you do on Sundays - and declared Senator McKenzie caught in slips?

Yes, it's obvious that the 100-million-dollar sports funding fiasco was a captain's call, but it was only the start of what Scott Morrison brought to the wicket in the game he calls politics.

With the skipper's ploy of reducing some debate to a cricket analogy, Scott Morrison, the new "king of spin", has rebranded being called a liar to make it seem like only a bit of sledging.

He has been caught out in Parliament doing a hula with the truth when he claimed to have informed Opposition Leader Anthony Albanese that he was going on a holiday to Hawaii. "Ā ʻoia", Hawaiian for "that's right, really" or in Australian lingo, "Howzat?" But this PM is obviously not the type to walk when caught, he'd defund the umpire and swear that wasn't a nick. His lie - just a misunderstanding.

Our sports-loving PM takes his game, if not his words, seriously - he even suggested Cricket Australia, like him, should have "... a bit more focus on cricket and a little less focus on politics".

After he spent New Year's Day 2020 entertaining the Australian and New Zealand men's cricket teams at Kirribilli House, while the country burned, the PM also tweeted:

He flew out to Hawaii shortly afterwards. But let's remember that the skipper is not the only member of the team and there's more than one game in town.

Let's not forget politics is a shared adventure. How dinky-di are the rest of the team? They seem to have gathered at cow corner to watch balls pepper the boundary as mistruths and deceptions are occasionally hit for six.

But the ministers - how good are they? Are they on their game, busy collapsing, outsourcing, or downsizing public service departments so they can have more latitude to make decisions and allocate resources? Yes, coloured pencils are expensive, but experts just get in the way when selling off important decisions about drought, schools, health, defence, bushfires, business support, energy, the environment - and sport of course.

"Mr Wibbly Wobbly" (former Senator Mathias Cormann) used to stack up runs against climate change and bowl the odd dibbly-dobbly at the opposition but unfortunately let the team down when he retired, took up extreme gymnastics and got right behind everything he'd spent years helping the Coalition team destroy.

Kevin Rudd asked to save Australia from Scott Morrison

After the Australian Government's botched effort to vaccinate the country, business leaders have turned to former PM Kevin Rudd for help.

Some players are also wondering why "Mr Chuckles", the minister for health and aged care Greg Hunt - who had a giggle about ex-PM Kevin Rudd trying to assist in obtaining Pfizer vaccines for Australia - is still the Federal Health Minister?

Despite attempts to hide, ignore, or obscure the facts, we all know what Greg Hunt didn't do and what his inaction cost Australia. This is no time for clowning around - players should be accountable for both their actions and inactions. Hunt should be backbench bound.

Christian Porter was, until recently, sitting there already, hiding behind a blind trust. Even Angus (not so tubby) Taylor, of whom great things were expected, is out of form. In an effort to keep his place he's spending a lot of time in the nets experimenting with a black ball - reckon he's good for a few wickets if they turn out the lights in a night game.

Morrison's teammate "Dutto" (Peter Dutton) - or is it "Ditto" - is giving his best. Keen to open the innings he has hit the China red ball for sixes lately; but he's not popular in the dressing room, leaving would-be players permanently on the ropes.

Some even think turning the outfield into a battlefield might not be a clever idea. Not really a team player but constantly whispering in the selector's ears, Dutton's belligerent enough to have a go in the Big Bash League but I don't picture him staying at the crease too long. Wouldn't survive in the long form of the game.

Dutton commits to following U.S. into war for Taiwan

Defence Minister Peter Dutton has pledged allegiance to the U.S. in defending Taiwan against attacks from China.

Then there's vice-captain, "beetroot Barnaby", back in the first eleven despite inconsistent form. Behind the wicket he's not a safe pair of hands, his arms thrashing around like a boy overboard and out of his depth.

He's dropped a few and been very public about his lost interest in the game - another player, divisive in the dressing rooms and pushing the board for big payouts for country players. Though you've got to admire Barnaby's ticker in bringing Bridget McKenzie back off the bench to ride shotgun on the rope and work out team colours for the big game.

With the biggest game of the political calendar on the horizon, the question for selectors is: Will skipper Scott Morrison step up to the challenge and lead the team? We know he is no good with a straight bat, but he is hot on sledging and all his balls are doosras. Despite his political sidestep fooling no one, I believe his footy and cricket-loving facade, Hi-Viz-hard-hat persona and barbeque smirk should see him safely to the crease.

But when his middle stump is removed - as it is likely to be - the board are wondering will Morrison, like Donald Trump, try and grab the bat and ball and go home? Or will he accept his dismissal as a consequence of his lack of concentration on the job and the fact that he put far too much spin on the ball? As the beamer shoots towards his chin strap, he might reflect on "no, we can't" as not being the best choice of slogan.

Let's hope the next team play with a much straighter bat and that the change of innings restores some quality and integrity to the game. Establishing a level playing field would be a start.

Geoffrey Dyer is a retired casual teacher with 41 years of experience in the classroom. Subjects taught include English, Modern and Ancient History, Society and Culture, Aboriginal Studies.

What are a few outright lies between friends, international leaders and the entire nation when you're the Prime Minister?