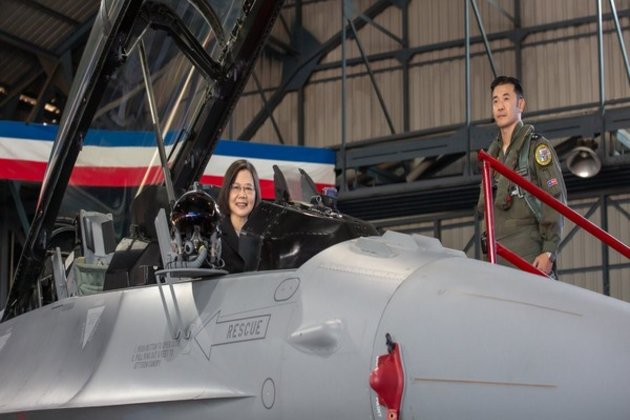 Taipei [Taiwan], November 19 (ANI): Taiwanese President Tsai Ing-wen on Friday termed the commissioning of high-tech F -16 jets in the country's air force as a testament to the nation's solid partnership with the US.

Tsai's remarks came at a commissioning ceremony of three US-made F-16 jets, a move that experts say would boost the island's defence against the Chinese military aggression.

Tsai said that the ceremony marked a new chapter in the history of the air force, a chapter significant in terms of Taipei's relationship with Washington and the quality of the nation's aerospace technology, Taipei Times reported.

These aircrafts are equipped with advanced technology that will substantially strengthen Taiwan's national defence against threats emerging from the Chinese Communist Party.

"As long as we continue to uphold the shared values of democracy and freedom, more like-minded countries will definitely join and stand with us along the same line," Tsai said, adding that the upgraded jets also signified a major step forward for the domestic defense industry.

More importantly, the enhanced stealth and long-range sensors of the F-16Vs would boost their combat capabilities in modern warfare settings, the President was quoted as saying by Taipei Times.

Earlier in October, a border security analyst had said that early delivery of the US-made F -16 jets would help Taiwan speed up the incorporation of the jets into its Air Force and strengthen its air defence capabilities amid the increase in incursions from China.

The remarks came from Institute for National Defence and Security Research analyst, Shu Hsiao-huang, who said that if the US agrees to hand over the 66 F-16Vs Taiwan purchased in 2019 earlier than scheduled, they could be stationed in Taitung and be used to respond to threats in southern Taiwan, where the possibility of an aerial conflict with China is greatest, Taiwan News reported citing the CNN.

This came as Beijing claims sovereignty over Taiwan and has increased military incursions in the democratic country.

Taiwan is a democracy of almost 24 million people located off the southeastern coast of mainland China.Despite being governed separately for more than seven decades, China has threatened that "Taiwan's independence" means war. (ANI)