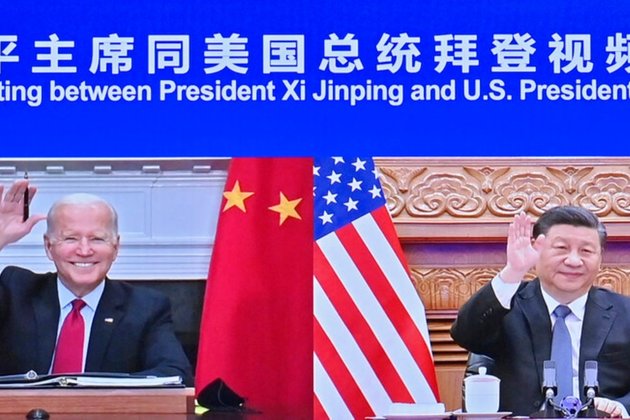 WASHINGTON - U.S. President Joe Biden and Chinese President Xi Jinping held 'an extended discussion' on Taiwan Monday night, broaching a long-running point of disagreement between the two that many worry remains a flashpoint for conflict.

Officials said Biden made U.S. interests clear to ensure that there are 'no unilateral changes to the status quo' across the Taiwan Strait during their virtual meeting that lasted for about three-and-a-half hours.

Biden 'was quite direct about his concerns about some of Beijing's behavior that he believes is at odds with' the peace and stability across the Taiwan Strait, said a senior U.S. administration official during a phone briefing after the virtual meeting.

China has escalated the dispatch of its military planes into Taiwan's air defense identification zone in recent months, with a record number of sorties flown last month.

Why China Sends Warplanes Into Taiwan's Airspace But Doesn't Attack

The White House readout said Biden 'underscored that the United States remains committed to the 'one China' policy, guided by the Taiwan Relations Act, the three Joint Communiques, and the Six Assurances, and that the United States strongly opposes unilateral efforts to change the status quo or undermine peace and stability across the Taiwan Strait.' These are references to existing U.S. policy on Taiwan, set in place under past U.S. administrations.

The Chinese readout, however, struck a different tone, excluding the Taiwan Relations Act and the Six Assurances that the U.S. deemed as fundamental to its long-standing policy.

'The 'One-China principle' and the three Sino-U.S. joint communiques are the political foundation of Sino-U.S. relations,' said the Chinese Ministry of Foreign Affairs.

'Some people in the United States intend to use Taiwan to contain China. This trend is very dangerous. It is playing with fire, and playing with fire must burn oneself,' added the Chinese statement, published following the virtual meeting.

That is 'pretty provocative language to use in this type of setting,' said Ryan Hass, who is a senior fellow in the Foreign Policy program at the Brookings Institution in Washington. 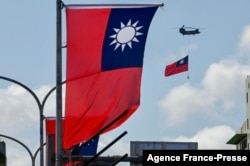 During a webinar on Tuesday, Hass said Beijing is doing so 'because they're frustrated' as the United States continues to 'demonstrate visibly its support for Taiwan' and make 'progress in internationalizing the Taiwan issue.'

'There's been a real effort to raise awareness of the international stakes of Taiwan's security in a way that frustrates Beijing's efforts to isolate, intimidate Taiwan and to treat Taiwan as a feature of U.S.-China competition,' he added.

China considers Taiwan a breakaway province that someday will be reunified with the mainland. Taipei considers the island a sovereign state.

'The U.S. and China are trying to signal the intention to each other, and it is worth noting how the U.S. and China put out policy guidance differently,' said Professor Yeh-chung Lu, who chairs the Department of Diplomacy at Taiwan's National Cheng-chi University.

Under the Taiwan Relations Act, the U.S. considers any effort to determine the future of Taiwan by other than peaceful means, including by boycotts or embargoes, a threat to the peace and security of the western Pacific area and of grave concern.

The U.S. also maintains 'the capacity of the United States' to resist any resort to force or other forms of coercion that would jeopardize the security, or the social or economic system, of the people who live on the island. 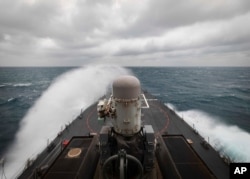 FILE - In this photo provided by the U.S. Navy, the guided-missile destroyer USS John S. McCain conducts routine underway operations in support of stability and security for a free and open Indo-Pacific, at the Taiwan Strait, Dec. 30, 2020.

Lu sees the regular transits by U.S. Navy ships through the Taiwan Strait as 'reassuring,' as the Chinese military intensifies its warplane flights into Taiwan's air defense identification zone.

The U.S. is telling China 'not to change the status quo,' Lu told VOA in an email, adding, 'There is a similarity' with 25 years ago.

He was referring to the Taiwan Strait crisis in March 1996.

The Pentagon still conducts Taiwan Strait transits in accordance with international law. A State Department spokesperson told VOA that the transits 'demonstrate U.S. commitment to peace and stability across the Taiwan Strait.'

The U.S. and Taiwan enjoy a robust unofficial relationship.

Next week, the U.S. and Taiwan will hold economic talks, the so-called Economic Prosperity Partnership Dialogue (EPPD) which was launched last November, with the resilience of global supply chains among the topics.

The 1979 U.S.-China Joint Communique switched diplomatic recognition from Taipei to Beijing. Relations between the U.S. and Taiwan have been governed by the Taiwan Relations Act that Congress passed in April 1979, under which the U.S. provides defense equipment to Taiwan.

Under the 'Six Assurances' offered by former U.S. President Ronald Reagan's administration, the U.S. did not agree to prior consultation with Beijing on arms sales to Taiwan, nor did it agree to take any position regarding sovereignty over Taiwan. The U.S. also promised it will never pressure Taiwan to negotiate with Beijing.

The Chinese readout said Biden stated during Monday night's virtual meeting that the U.S. does not support 'Taiwan independence.'

'On the question of Taiwan independence,' a senior U.S. administration official told reporters after the meeting, 'It is not something that the United States supports' but it is not a U.S. policy 'that's particularly new.' 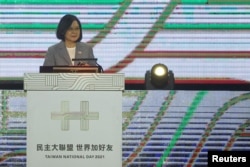 Taiwan President Tsai Ing-wen has said there is no need for Taiwan to declare independence as the Republic of China (R.O.C.) has been established since 1912.R.O.C. is Taiwan's formal name.

Tsai staked out her government's approach to the sensitive issue during her 2021 National Day Address.

Natasha Kassam, director of the public opinion and foreign policy program of the Australia-based Lowy Institute, recently wrote in an opinion piece in The New York Times that 'most in Taiwan - 87 percent, according to a recent poll - want to maintain some form of the status quo.'

Kassam added the status quo means maintaining de facto independence but avoiding retaliation from China. And she wrote the percentage of Taiwan's people who want to maintain the status quo indefinitely is growing.