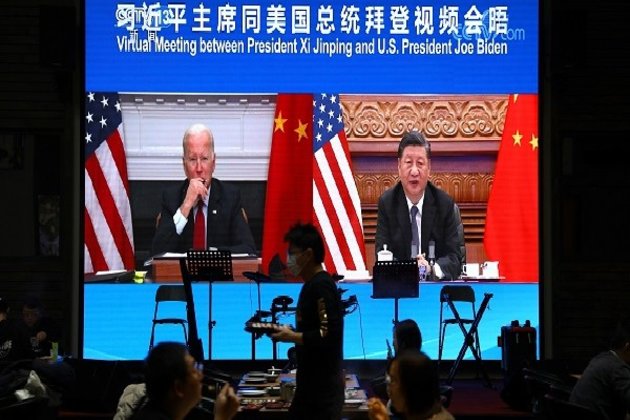 Beijing [US], November 16 (ANI): China on Tuesday said that its ties with the US have reached a crucial crossroads after a virtual summit between leaders Xi Jinping and Joe Biden.

During a daily briefing, Chinese foreign ministry spokesperson Lijian Zhao said Beijing hopes Washington will work with China to implement the spirit of the two heads of state's virtual meeting through concrete actions to bring bilateral relations back onto the track of sound and steady development.

"The China-US relationship has reached a crucial crossroads. We hope the US will work with China to implement the spirit of the two heads of state's virtual meeting through concrete actions to bring bilateral relations back onto the track of soundsteady development," Lijian said.

The highly anticipated meeting between US President Joe Biden and Chinese President Xi Jinping on Tuesday saw the two leaders locking horns on the issue of Taiwan, in a summit that saw a discussion on strategic and overarching importance and topics of mutual interest.

Both leaders held an "in-depth and constructive" meeting for over three hours and exchanged views on bilateral relations on issues of fundamental importance shaping the development of China-US relations.

Xi said that China will be compelled to take resolute measures, should the separatist forces for "Taiwan independence" "provoke us, force our hands or even cross the red line.

"Chinese President noted the new wave of tensions across the Taiwan Strait, and ascribed the tensions to attempts by the Taiwan authorities to look for US support for their independence agenda as well as the intention of some Americans to use the issue to contain China, Xinhua news agency reported.

"Such moves are extremely dangerous, just like playing with fire," Xi said.

For the two countries to get along in the new era, three principles must be followed, Xi emphasised.

"First, mutual respect. The two countries need to respect each other's social systems and development paths, core interests and major concerns, and respect each other's right to development. Second, peaceful coexistence. No conflict and no confrontation is a line that both sides must hold. Third, win-win cooperation. The world is big enough for the two countries to develop individually and collectively," he said.

Underscoring his country's commitment to the "one China" policy, Biden strongly opposed unilateral efforts to change the status quo or undermine peace and stability across the Taiwan Strait. (ANI)