US 'absolutely' could defend Taiwan from China, says US top General 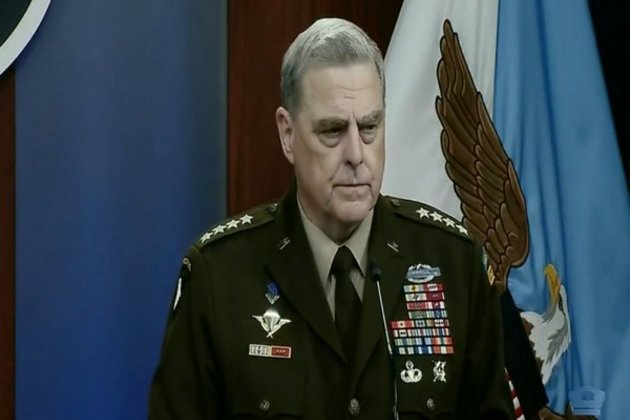 Washington [US], November 4 (ANI): US Joint Chiefs of Staff Chairman Gen Mark Milley on Wednesday said that the American military "absolutely" could defend Taiwan from a potential Chinese attack if asked to do so.

Speaking at the Aspen Security Forum, Milley said he did not expect China to attempt to seize the self-governing island in the next 24 months, but should it happen, US forces "absolutely have the capability" to defend Taipei, "no question about that," reported The Hill.

He also said that Beijing is "clearly and unambiguously building the capability to provide those options to the national leadership if they so choose at some point in the future.""Near future, probably not, but anything can happen," he added in an interview conducted by NBC News's Lester Holt.

China in the past several months has amped up its provocations against the island it sees as a rogue territory, flying warplanes into its air identification zone 150 times over the course of about four days in early October.

The aggression has been a critical flashpoint amid the ongoing poor relations between Washington and Beijing, with top Taiwanese and American officials worried about an eventual military confrontation.

Milley stressed the long-held US stance of "strategic ambiguity" when it comes to Taiwan, saying that it would be up to the White House to decide whether to intervene if China sought control of the island, reported The Hill.

Referring to China's recent test of a hypersonic weapon system, the Pentagon top officer expressed concern over Beijing's capabilities and said this is why the United States sees the nation as a pacing challenge, saying that it points to one of the most significant global power shifts since the World Wars, reported The Hill.

Milley, who last week said the missile development is "very close" to another "Sputnik moment," said the world is now "witnessing one of the largest shifts in global geostrategic power." (ANI)