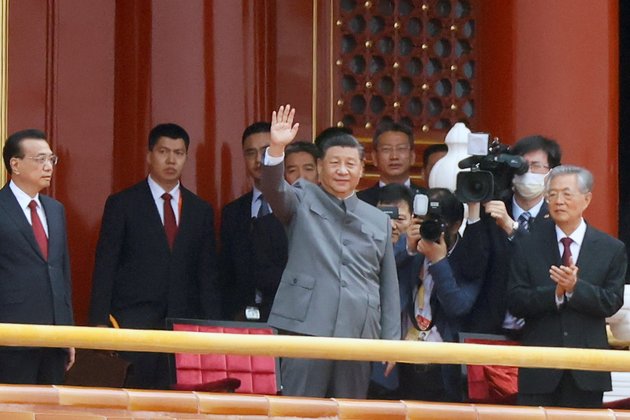 Chinese President Xi Jinping marked the 100th anniversary of the ruling Communist Party Thursday with a warning that attempts to "bully" his country will end in bloodshed.

Hundreds of people gathered in Beijing's Tiananmen Square to witness an elaborate ceremony on the landmark event, including an spectacular aerobatics show staged by dozens of helicopters and fighter jets.

A screen shows Chinese President Xi Jinping speak during a ceremony to mark the 100th anniversary of the founding of the ruling Chinese Communist Party at Tiananmen Square in Beijing Thursday, July 1, 2021. (AP Photo/Ng Han Guan)

Wearing a buttoned-up jacket similar to that worn by party founder Mao Zedong, Xi told the audience the party had achieved its primary goal of building a moderately prosperous society over its century of existence.

"The Communist Party of China and Chinese people solemnly declare to the world with their brave and tenacious struggle that the Chinese nation has ushered in a great leap from standing up, gaining wealth, to growing strong, with the realization of the great rejuvenation of the Chinese nation entering an irreversible historical process," Xi said.

Xi said the Chinese people "have never bullied, oppressed or enslaved the peoples of other countries, not in the past, not now, and not in the future," an apparent rebuke of international accusations of Beijing's brutal treatment of ethnic Uyghurs in Xinjiang and its increasingly stifling grip on Hong Kong.

He warned, though, that China would also "never allow any foreign forces to bully, oppress or enslave us," adding that anyone who tried will end up with broken heads and bloodshed "in front of the Great Wall of steel" built by China's 1.4 billion people.

Xi pledged to continue China's massive military build-up and to seek peaceful reunification with self-ruled Taiwan, calling on "compatriots on both sides of the Taiwan Strait" to work together and "resolutely crush any 'Taiwan independence' plots."

China's Communist Party took over the mainland in 1949 when it forced Chiang Kai-shek's Nationalist forces to flee to Taiwan to end the civil war. Despite Taiwan's self-rule, Beijing claims the island is part of its territory and even vowed to use force to bring it under its control.

Xi and the party are riding high as China continues its swift recovery from the COVID-19 outbreak and takes a more assertive stance on the global stage. However, the government is facing a worsening demographic outlook that imperils long-term economic growth.