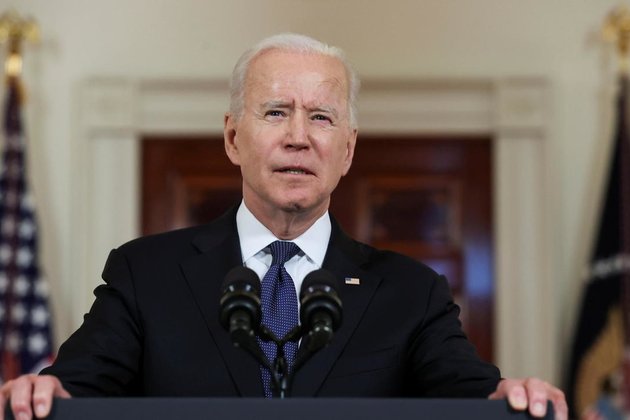 U.S., UK, Egyptian and UN leaders on Thursday welcomed a ceasefire announced by Israel and Hamas after 11 days of bombing and rocket strikes that killed nearly 250 people.

"I believe we have a genuine opportunity to make progress and I'm committed to working towards it," U.S. President Joe Biden said at the White House, highlighting Egypt's role in brokering the truce.

He said he had spoken Thursday with both Israeli Prime Minister Benjamin Netanyahu and Egyptian President Abdel Fattah al-Sisi.

Biden, who has come under criticism from many within his own Democratic party for not pushing U.S. ally Israel more publicly to call a ceasefire, touted his administration's "quiet, relentless diplomacy".

Echoing a line taken by the White House throughout the 11-day conflict, Biden indicated that the U.S. goal, involving "incredible efforts", was above all to limit the duration of the bloodshed.

The aim was "avoiding the sort of prolonged conflict we've seen in previous years", he said.

Biden referred to the casualties on both sides, and said, "Palestinians and Israelis equally deserve to live safely and securely and enjoy equal measures of freedom, prosperity, and democracy."

He also pledged U.S. humanitarian aid, while emphasizing that this would be channeled through the Palestinian Authority in the West Bank, not Hamas so that the organisation could not "simply restock its military arsenal".

Biden put particular weight on a pledge to back "Israel's right to defend itself against indiscriminate rocket attacks from Hamas and other Gaza-based terrorist groups."

In a rejection of some Democratic members of Congress who are pushing to stop an imminent U.S. arms sale to Israel, Biden said he had assured Netanyahu of his "full support" in replenishing the Iron Dome anti-missile system used to shoot down Hamas' projectiles.

Biden also had notable words of thanks for Sisi, whose authoritarian rule has complicated the long close U.S.-Egyptian relationship.

"I extend my sincere gratitude to President al-Sisi and the senior Egyptian officials who have played such a critical role in this diplomacy," Biden said.

Sisi reciprocated with a series of tweets thanking Biden for his role in making the Egyptian ceasefire initiative succeed.

Sisi said he and President Biden both saw the urgency of managing the conflict between all parties with diplomacy.

Britain on Thursday welcomed a ceasefire announced by Israel and Hamas and called on all sides to work to make it durable and "end the unacceptable cycle of violence" in the region.

"All sides must work to make the ceasefire durable and end the unacceptable cycle of violence and loss of civilian life," UK Foreign Secretary Dominic Raab said on Twitter, adding that Britain supports "efforts to bring about peace".

The ceasefire was also welcomed at the UN, with Secretary-General Antonio Guterres adding a warning.

"I stress that Israeli and Palestinian leaders have a responsibility beyond the restoration of calm to start a serious dialogue to address the root causes of the conflict," Guterres said.

"Gaza is an integral part of the future Palestinian state and no effort should be spared to bring about real national reconciliation that ends the division."

UN Middle East Peace Envoy Tor Wennesland wrote on Twitter: "I welcome the ceasefire between #Gaza & #Israel. I extend my deepest condolences to the victims of the violence & their loved ones. I commend #Egypt & #Qatar for the efforts carried out, in close contact w/ the @UN, to help restore calm. The work of building #Palestine can start."

Both Israel and Hamas, meanwhile, claimed significant gains from the fighting.

"This is the euphoria of victory," said Khalil al-Hayya, the second most senior member of Hamas's political bureau in the Gaza Strip, in a speech to thousands of people celebrating in Gaza City after the ceasefire came into place. He also promised to reconstruct homes destroyed by Israeli airstrikes.

He did not reveal the terms of the deal.

Separately, another senior Hamas member warned that the group remained ready to take up arms at a moment's notice.

"It is true the battle ends today but Netanyahu and the whole world should know that our hands are on the trigger and we will continue to grow the capabilities of this resistance," said Ezzat El-Reshiq, a member of the Hamas political bureau, in an interview with Reuters.

Speaking to his U.S. counterpart Lloyd Austin, Gantz said Israel's defence establishment would "continue to work closely and in full cooperation with the Pentagon and the U.S. administration to stabilise the region", Gantz's office said.

Since the fighting began on May 10, health officials in Gaza said 232 Palestinians, including 65 children, had been killed and more than 1,900 wounded in aerial bombardments. Israel said it had killed at least 160 combatants in Gaza.

Due to Covid, no foreigners to be allowed at Tokyo Olympics

TOKYO, Japan: The Tokyo Olympic Committee met on Monday to announce that due to the ongoing Covid pandemic in Japan, ...

EU says will sanction Lebanon if no government formed

BEIRUT, Lebanon: EU Foreign Ministers warned they might apply sanctions to Lebanon if its political leaders continue to block the ...