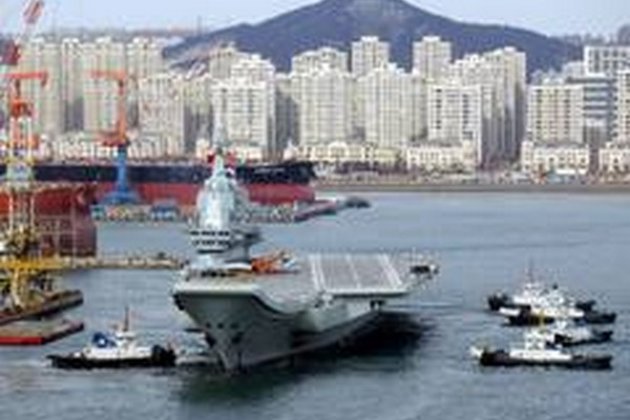 Tokyo [Japan], April 28 (ANI): Japan's Defense Ministry on Wednesday confirmed that a Chinese aircraft carrier Liaoning after passing through waters between two Japanese islands returned to the East China Sea from the Pacific.

The ministry said the Maritime Self-Defense Force confirmed that during the period from Monday to Tuesday the Liaoning, accompanied by five other vessels, sailed northward between Okinawa's main island and Miyakojima Island, and then entered the East China Sea, reported NHK World.

Early in April, the fleet was seen sailing south in the same area and entering the Pacific.

This is the second time that the Chinese aircraft carrier has passed between the two Japanese islands on a round trip.

The Defense Ministry also said that, after entering the East China Sea, an early warning helicopter was viewed taking off from the Liaoning and coming around 50 to 100 kilometers to the northeast of Taisho Island, part of Japan's Senkaku Islands. This prompted the Air Self-Defense Force's aircraft to scramble.

Japan controls the Senkaku islands. The Japanese government maintains the islands are an inherent part of Japan's territory. China and Taiwan claim them.

Meanwhile, Japan has welcomed the United Kingdom's plan to deploy a fleet led by its new flagship HMS Queen Elizabeth, to the Indo-Pacific region.

Beijing announced earlier this month that the aircraft carrier group had conducted a naval exercise in the waters near Taiwan.

Indo-Pacific region is largely viewed as an area comprising the Indian Ocean and the western and central Pacific Ocean, including the South China Sea.

China's territorial claims in the South China Sea and its efforts to advance into the Indian Ocean are seen to have challenged the established rules-based system.

China claims sovereignty over almost the entire South China Sea and has overlapping territorial claims with Brunei, Malaysia, the Philippines, Vietnam and Taiwan.

China has been increasing its maritime activities in both the South China Sea and the East China Sea over the past few months, partly in response to Beijing's concerns over the increasing US military presence in the region because of escalating Sino-US tensions. (ANI)