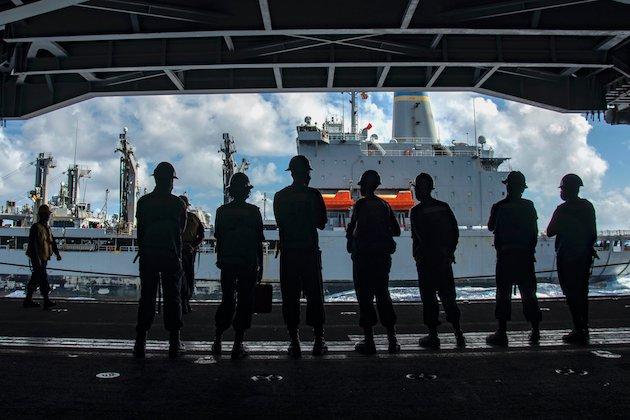 The U.S. Navy is asking itself how the service can sustain the fleet in high-end conflict when it no longer has government-owned or American-flagged merchant vessels feeding forward bases to rely on in wartime, a maritime analyst told an international online forum Thursday.

Sal Mercogliano, associate professor of history at Campbell University, said sustainment for the Navy "has changed fundamentally since 1945." The shift exposes shortfalls in being able to "logistically support itself" when deployed.

The merchant fleets themselves have changed from being government-owned to held by a few privately-owned companies flying "flags of convenience," like Panama, Liberia, Hong Kong or the Marshall Islands. Over the same period, the amount of world cargo carried by sea has increased more than 20 times above World War II levels.

The shippers are also moving cargo far more rapidly both from port to port and from container ship to shore than they had in the past.

The United States' decline as a maritime power has had a profound effect on Navy shipbuilding and repair, he said. Mercogliano, who wrote on sealift in December for Proceedings, noted that with commercial orders for large cargo ships flat or falling, there are a shrinking number of private yards available to build auxiliaries like tankers.

USS Fitzgerald (DDG-62) sits inside a dry-dock in preparation for launch at Huntington Ingalls Industries Pascagoula, Miss., shipyard on April 16, 2019. US Navy Photo

The impact is noticeable on the number of yards open around the country to repair warships, auxiliaries and Coast Guard vessels. He used the example of the year and a half it took to repair Arleigh Burke-class destroyer USS Fitzgerald (DDG-62) following a collision at sea that killed 10 sailors.

"We let down our guard" on allowing American shipyards to close down, retired Coast Guard Capt. James Howe said at the same forum.

The environment in which these vessels would operate has also changed to potentially being "highly contested," even in supplying forward bases that supported American and allied military efforts in Korea, Vietnam and Desert Shield/Desert Storm.

"Will those international companies make their vessels available" in a conflict remained unanswered. He added that during the pandemic, cruise lines decided to keep ships in port and lay off crews to wait until they could safely resume business.

Looking at the readiness of the 61 ships that would provide "surge sealift," Mercogliano said that when stress-exercised in 2019, only 40 percent of ships meant to be activated were ready to deploy on schedule. The desired reliability rate is 85 percent. The average age of the vessels is 46 years.

In short, "combatant commanders don't have what they expect" to have at their disposal in a crisis, he said.

Likewise, the ships in the two squadrons that are prepositioned, stationed in the Marianas in the Pacific and at Diego Garcia in the Indian Ocean, are more than 25 years old. "Prepositioning has been a validated concept since the 1990s" when the stores and equipment as heavy as M-1 tanks were offloaded for Marines in Desert Storm, Mercogliano said.

But prepositioning is expensive. "You're paying for them to stand around," waiting to be used during an emergency and the forces are vulnerable to attack, he noted. Over time, the number of squadrons was cut from three to two. Additionally, "each of these squadrons do not carry the full complement for a Marine brigade that they should carry. They carry about two-thirds" of the expected requirement.

"Unfortunately, this has not been a priority" in shipbuilding plans, Mercogliano noted.

Speaking at the same Kiel University in Germany forum, Howe said "when we go to world-wide operations [from Bahrain since 2002 to the Western Pacific, to drug interdiction and migrant movement in the eastern Pacific and Caribbean], we're stretched very thin."

Howe said the active-duty Coast Guard with 41,000 service members is "a little big bigger than the New York City Police Department. We have to cover the whole U.S., and the expeditionary operations." Zeroing in on the eastern Pacific as one area, he said "it is larger than the continental United States." At any one time, five to 10 Coast Guard and Navy vessels with Law Enforcement Detachments aboard are patrolling the waters known for trafficking cocaine.

He said the Coast Guard is in the midst of a major recapitalization of its sea-going fleet and aviation assets. Using the heavy icebreaker program to illustrate long-term budget impact on a service that usually has sharp curbs on spending, Howe said the cost is running about $800 million per hull.

While current plans call for three Polar Security Cutters, it would require a 10-year congressional commitment of support for that program alone. "It will be a very hard thing to get through, keep on budget, on schedule," Howe said.

Howe and Mercogliano said they saw little support in Congress for using foreign shipyards to build the heavy icebreakers. Only Finland and Russia are building them now, but China has shown interest in the market.

The Navy is looking for a "quick fix" in buying and converting foreign-built ships for surge capacity and pursuing an acquisition and construction strategy similar to what it followed after the first Gulf War. Mercogliano said a major difference now in buying foreign vessels is these "ships are built to different standards" than what the military requires.

In re-building an American international ocean-going merchant fleet, he added that the matter comes down to what cargo will be available for these vessels to carry and at what price to shippers, since U.S. labor costs are higher than the Chinese. That cost difference can translate into government subsidies.