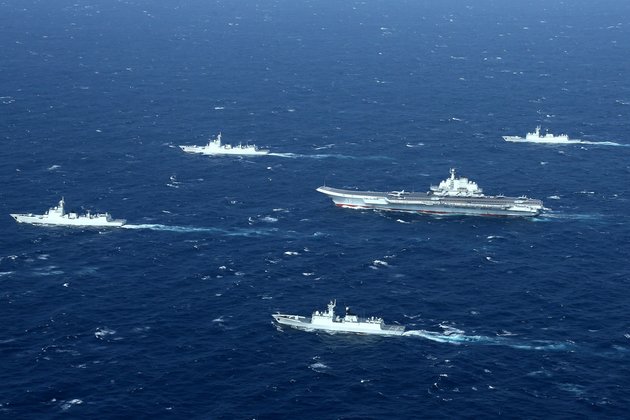 The Chinese military exercises in the disputed waters of the South China Sea are aimed at testing the Biden administration's China policy, according to defense experts.

The three-day event that began Wednesday comes days after the U.S. sent an aircraft carrier group to the contested maritime area to "conduct routine operations and promote freedom of the seas," according to a statement by the U.S. Indo-Pacific Command.

Timothy Heath, a defense expert at the Rand Corporation, a think tank, told VOA Mandarin that Beijing is sending an early signal to the administration of President Joe Biden, who was sworn into office on January 20.

"This seems part of a broader effort for China to signal its determination to maintain or escalate confrontational policies if that is what Biden wants," he said.

The Chinese navy has grown rapidly in recent years and is breaking the balance of military power in the Western Pacific region.

According to an annual review of Chinese military power by the U.S. Department of Defense (DoD), China has achieved parity with - or even exceeded - the United States in several military modernization areas.

FILE - Chinese People's Liberation Army Navy troops stand in formation on the deck of a type 054A guided missile frigate "Wuhu" as it docks in Manila, Philippines, Jan. 17, 2019.

"China has the world's largest navy now, larger than the United States. And it's filled with new technologically advanced submarines and destroyers and amphibious ships," Craig Singleton, an adjunct fellow at the Foundation for Defense of Democracies, told VOA. He focuses on great-power competition with China.

By comparison, "the U.S. Navy is getting smaller, the ships are getting older. It costs a lot of money to build new ships," he said.

According to the U.S. Defense Department, China is the top ship-producing nation in the world by tonnage in 2020. The Chinese navy now has an overall battle force of about 350 ships and submarines. In comparison, the U.S. Navy's battle force is about 293 ships as of early 2020, according to the annual review.

Bryan Clark, an expert of naval operations and military competitions at the Hudson Institute, told VOA Mandarin that a larger Chinese navy force presents a bigger challenge to the U.S.

"It means that the U.S. Navy will have a harder time defending partners and allies, because the PLA (People's Liberation Army) is going to have a lot of ships to gain sea control in areas around Taiwan and around the Senkaku Islands," he said.

FILE - Activists holding Chinese and Taiwanese flags are arrested by Japanese police officers after landing on Uotsuri Island, one of the islands of Senkaku in Japanese and Diaoyu in Chinese, in East China Sea, Aug. 15, 2012.

China views Taiwan as a breakaway province and points to history for its claims to the Senkaku Islands now controlled by Japan but also claimed by Taiwan. In July, the Trump administration, which left office on January 20, rejected almost all of China's maritime claims in the region. This changed previous U.S. policy, which had been to insist that disputes between China and its neighbors face U.N.-backed resolution via U.N.-backed arbitration.

At the time, then-Secretary of State Mike Pompeo said, "The world will not allow Beijing to treat the South China Sea as its maritime empire."

Yet Chinese naval ambition is not limited to the Pacific Ocean. Observers say the Chinese fleet is also active in the Indian Ocean, and the Mediterranean and Baltic Seas.

According to a report released by the Department of Defense in late 2019, "There have been more of these global Chinese naval deployments in the last 30 months than in the last 30 years."

"China surpassed every American security planners' expectations in its successful building and deploying of the world's largest maritime fleet in just 20 years," said Toshi Yoshihara, co-author of a report released earlier this month by the Center for Strategic and Budgetary Assessments.

In December, the Trump administration unveiled a new 30-year shipbuilding plan aimed at maintaining the capability of the Navy's fleet.

The plan called for accelerating production of the Constellation-class frigate and boosting submarine production.

A statement from the Department of Defense said the fleet would hit 405 ships by the end of the 30 years, referencing a report to Congress.

Yet analysts are skeptical about how Washington will pay for the expansion. When asked during his confirmation hearing whether he supported this shipbuilding plan, Secretary of Defense Lloyd Austin said he was open to discussion.

"I think it's important that we maintain the capabilities that we'll need to be relevant, not only today, but relevant tomorrow," he said, "So I look forward to getting on the ground, and if confirmed, working with the leadership of the Navy to better understand how we're going to support those requirements."

When announcing a 10-year plan for the U.S. Navy earlier this month, Chief of Naval Operations Mike Gilday said Washington needs to understand the urgency of the matter.

"I don't mean to be dramatic, but I feel like if the Navy loses its head, if we go off course, and really take our eyes off those things we need to focus on with respect to readiness, capabilities, capacity, and sailors, I think we may not be able to recover in this century, based on the trajectory that the Chinese are on right now," he said at the plan's announcement at the Surface Naval Association's 33rd National Symposium.

Lin Yang contributed to this report, which originated on VOA Mandarin.