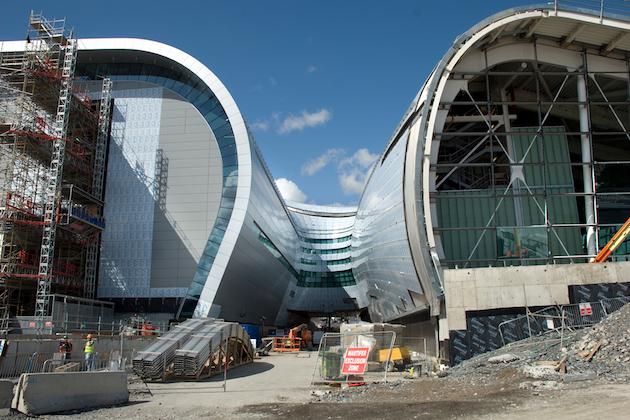 Since it opened on 19 November, 2010 Terminal 2 has processed more than 96.6 million passengers.

If it wasn't for COVID-19 the terminal would have welcomed well over 100 million passengers in its first 10 years of operation.

In a touch of iron the beginning of Terminal 2's first decade, and it's end have been highloighted by global economic crises. The first in 2010, was coming in the aftermath of the Global Finan cial Crisis, ansd the send at the peak of the Covid-19 pandemic.

The extra capacity that Terminal 2 delivered across the entire airport was the foundation for nine consecutive years of passenger growth from 2010 to 2019. During that period, annual passenger numbers at Dublin Airport increased by almost 79% from 18.4 million to 32.9 million. The growth, which brought economic benefits to all corners of Ireland would not have been possible without Terminal 2.

At its peak, Terminal 2 was the largest construction project in the country and employed up to 2,600 workers on site plus hundreds more supporting the project offsite. During three years of construction, more than 10,400 men and women were involved in the overall project and more than 1,000 new jobs were created when the terminal opened.

Construction started on October 1, 2007 and began to wind down by May 2010 when the testing of systems and training of staff started in earnest. Between June and November 2010 more than 4,000 employees of daa, airlines, ground handling companies, and retail and other service providers, were familiarised with T2 and then trained for their specific roles.

About 4,000 members of the public volunteered to take mock trips to trial all aspects of T2.

Terminal 2, which won a series of design and construction awards, was built on daa's behalf by a consortium comprising Arup, Mace, Pascall+Watson and Davis Langdon PKS. The project team turned a site constraint into a feature by bringing the main airport road underneath the centre of the award-wining terminal.

At T2's official opening, daa's then Chairman David Dilger described the new terminal as "a €600 million investment in Ireland's future." It is expected that investment will continue to benefit the Irish economy for decades to come.