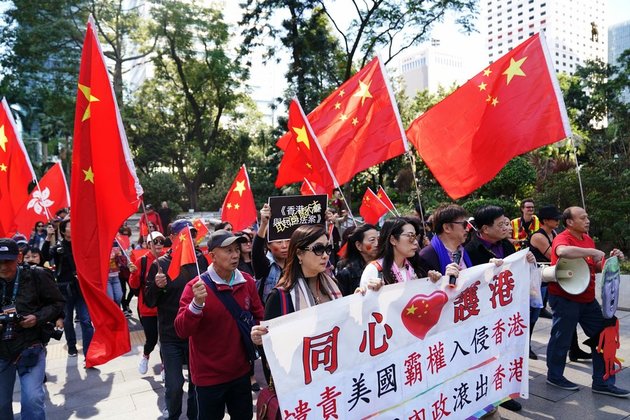 Washington should not test China's determination to safeguard its national security on its own territory. Those who try to inflict damage to Hong Kong should not expect Beijing to sit on its hands and watch as its sovereign rights are eroded.

BEIJING, July 15 (Xinhua) -- The signing of the so-called "Hong Kong Autonomy Act" into law on Tuesday by the White House is yet another example of Washington's reckless decisions to meddle in China's internal affairs.

According to the new piece of legislation, Washington seeks to sanction foreign individuals and entities allegedly involved in extinguishing freedoms in Hong Kong.

The new U.S. law, as those that came before it, once again tramples on international law and the basic norms of international relations, turns a blind eye to the Chinese government's legal jurisdiction in Hong Kong, and tries to delegitimize Beijing's efforts to maintain national security in the Chinese city.

A ship carrying the slogan of "celebrating the passage of the Law of the People's Republic of China on Safeguarding National Security in the Hong Kong Special Administrative Region (HKSAR)" sails at the Victoria Harbour in Hong Kong, south China, July 1, 2020. (Xinhua/Wang Shen)

All sanctions are a double-edged sword. Hong Kong is one of the world's most dynamic financial and trade hubs, and home to tens of thousands of foreign firms. Hurting Hong Kong means hurting foreign businesses.

Take the United States for example. The country has vital interests in Hong Kong. It has more than 1,300 enterprises, including almost all of America's major financial firms, operating in the Chinese city. Also, Hong Kong was the source of America's largest bilateral trade surplus last year, at 26.1 billion U.S. dollars, according to U.S. Census Bureau data.

Thus, if Washington goes ahead with its sanctions, its own interests are at stake.

Shops are closed early at the Causeway Bay area due to unrest in south China's Hong Kong, Oct. 13, 2019. (Xinhua/Lu Ye)

The newly signed legislation does not come as a surprise. In recent months, China hawks in Washington have launched a ferocious campaign against Beijing. They have left no stone unturned in their attempts to interfere in China's domestic affairs.

Utilizing a variety of pretexts, like freedom in Hong Kong and human rights in Xinjiang, the purposes are the same: to divert public attention from the widespread protests against racial discrimination and Washington's failure to control the COVID-19 crisis; to flex some political muscle with presidential elections merely four months away; and to stymie China's development.

Imagine if China were to sanction the United States for the brutal treatment of its African American population or its catastrophic attempt at home to contain COVID-19, a threat to the common health of the entire world.

In the case of Hong Kong, China hardliners in Washington want to encourage extremist violence there, thereby severely compromising Hong Kong's social stability and economic viability. As long as their own political interests are met, who cares about the people of Hong Kong.

The Declaration on Principles of International Law, adopted by the UN General Assembly in 1970, clearly notes that no country or group of countries has the right to directly or indirectly interfere in the internal or foreign affairs of any other country for any reason.

It is not up to Washington to decide the degree of autonomy in Hong Kong.

Moreover, the law to safeguard national security in Hong Kong has clearly demonstrated China's resolve to ensure a steady and sustained implementation of the "one country, two systems" principle, a high degree of autonomy, and the long-term stability and prosperity of the global financial center in order to better protect the freedom and rights of people working and living there.

Washington should not test China's determination to safeguard its national security on its own territory. Those who try to inflict damage to Hong Kong should not expect Beijing to sit on its hands and watch as its sovereign rights are eroded.

People from all walks of life attend a campaign in support of the national security legislation for the Hong Kong Special Administrative Region (HKSAR) in Hong Kong, south China, May 24, 2020. (Xinhua/Lui Siu Wai)

The Chinese foreign ministry said on Wednesday that China would appropriately respond and impose sanctions on relevant personnel and entities of the United States.

A stable and prosperous Hong Kong is a prerequisite for the Chinese city to continue functioning as an international financial and trade hub and serve U.S. and other foreign interests seeking to benefit from the city's economic vitality. If Washington continues to meddle in China's internal affairs and compromise its sovereignty, it will prove to be a dead end. ■