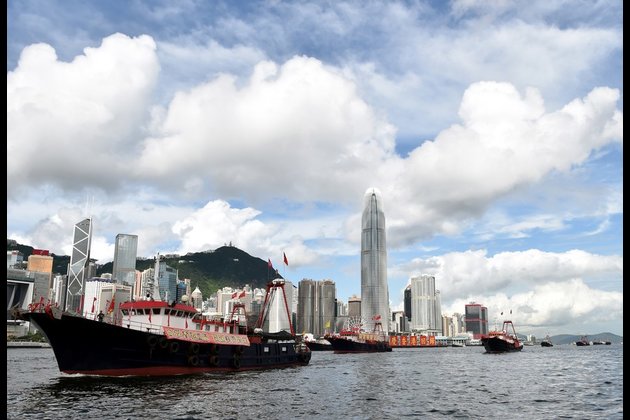 More than 100 fishing boats parade at the Victoria Harbour to celebrate the 23rd anniversary of Hong Kong's return to the motherland in Hong Kong, south China, July 1, 2020. (Xinhua/Lo Ping Fai)

BEIJING, July 15 (Xinhua) -- China firmly opposes and strongly condemns the move of the U.S. side of signing the so-called "Hong Kong Autonomy Act" into law, said a statement released on the foreign ministry's website Wednesday.

In disregard of China's serious representations, the United States recently signed into law the so-called "Hong Kong Autonomy Act" passed by its Congress, according to the statement.

"The Chinese government firmly opposes and strongly condemns this move by the United States," said the statement.

The enactment and enforcement of the Law of the People's Republic of China on Safeguarding National Security in the Hong Kong Special Administrative Region (SAR) is fully consistent with the relevant provisions of the Chinese Constitution and the Basic Law of the Hong Kong SAR.

It provides the institutional and legal safeguards for the sound and sustained implementation of "one country, two systems," and serves to uphold sovereignty, security and development interests of the country as well as the long-term stability and prosperity of Hong Kong. The Law is unanimously supported and endorsed by all the Chinese people including the people in Hong Kong, the statement said.

Noting Hong Kong is a special administrative region of China, the statement said Hong Kong affairs are purely China's internal affairs. No foreign country has the right to interfere. China is firmly resolved to uphold its sovereignty and security, safeguard the prosperity and stability of Hong Kong, and oppose external meddling in Hong Kong affairs. The U.S. attempt to obstruct the implementation of the national security law in Hong Kong will never succeed.

In order to safeguard its legitimate interests, China will make necessary response and sanction the relevant individuals and entities of the United States, said the statement.

"We urge the U.S. side to correct its mistakes, not to enforce the so-called 'Hong Kong Autonomy Act,' and stop interfering in Hong Kong and other internal affairs of China in any way," it said, adding that if the U.S. side insists on going in the wrong direction, China will respond resolutely. ■