Trump in attendance as 1,107 cadets graduate in ceremony at West Point 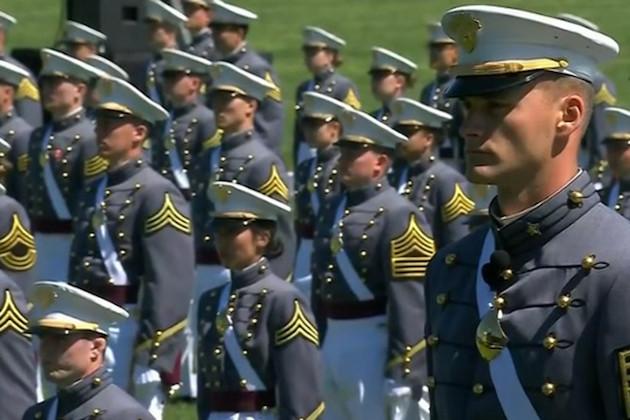 WESTPOINT, New York - U.S. President Donald Trump defying social-distance protocols ensured the West Point Academy graduation went ahead on Saturday, and he was in attendance to preside over it.

The president praised the graduates saying they could have gone to any top-ranked university but instead chose to devote their lives to the defense of America.

"The survival of America and the endurance of civilization itself depends on the men and women just like each of you," he said.

The commencement ceremony at the United States Military Academy at West Point, New York, saw 1,107 cadets assembled on the parade field known as the Plain. This marked Mr Trump's first visit to West Point. It was also the first time since 1944 that the graduation ceremony had been held at The Plain.

"This premier military academy produces only the best of the best, the strongest of the strong and the bravest of the brave. West Point is a universal symbol of American gallantry, loyalty, devotion, discipline and great skill," he said.

The president detailed the history and achievements of many past graduates of the academy.

"I have no doubt that the young men and women before me today, will add your names to this eternal chronicle of American heroes," he said. "You will go forth from this place, endeared by your countrymen, dreaded by your enemies and respected by all throughout the world. Someday generations of future West Point cadets will study your legacy. They will know your deeds. They will celebrate your triumphs and they will proudly follow your example."

Trump noted that the graduating cadets came from every state, race, religion and ethnicity, and countries such as Honduras, Pakistan, the Philippines, South Korea, Singapore and Taiwan, adding that "when you entered these grounds, you became one part of one team, one family, proudly serving one great American nation. You became brothers and sisters pledging allegiance to the same timeless principles, joined together in a common mission, to protect our country, to defend our people and to carry on the traditions of freedom, equality and liberty that so many gave their lives to secure."

The president gazed on an empty seat on the Plain, which had a portrait of C.J. Morgan on it. Morgan was a cadet who died in an accident last year. "We are deeply moved to be joined by his father," he said. "We will carry C.J.'s blessed memory in our hearts forever."

Trump also noted that America will celebrate the 245th birthday of the Army on Sunday.

Williams, who also spoke,lamented the absence of families and friends to cheer on the graduates, but said they would be watching the ceremony being broadcast and were with them in spirit.

He also thanked the USMA class of 1970 for their mentorship of the graduating cadets.

The graduating class has 38 scholarship recipients to include Rhodes, Fulbright, Marshall, Schwarzman and Truman.

After the size of the corps doubled in the 1960s, the commencement ceremony was held every year atMichieStadium except in 1977; before being held at Michie Stadium, smaller ceremonies were held at Gillis Fieldhouse and Trophy Point.

The graduation on Saturday also marked the 40th anniversary of the first women graduating in 1980.

(This is an adaption of an article written by David Vergun of U.S. Department of Defense News).