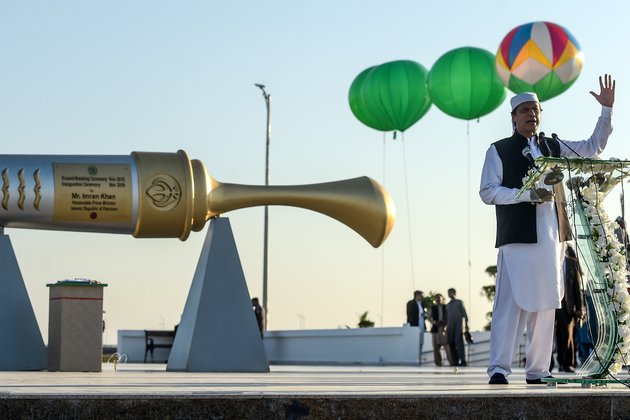 ISLAMABAD - Hundreds of pilgrims Saturday from India's minority Sikh community crossed the international border with Pakistan without a visa for the first time in 72 years to pay homage to one of their holiest shrines.

The rare instance of cooperation to facilitate the religious journey comes amid a sharp deterioration in already tense ties between the nuclear-armed rival countries sparked by recent Indian actions in the disputed Kashmir region. Both India and Pakistan control portions of the Himalayan territory but claim it in its entirety.

Indian pilgrims, including senior politicians and officials, traveled through a newly established 4.1-kilometer cross-border corridor, featuring fenced-off sides and leading straight to the shrine in the Pakistani town of Kartarpur in Punjab province.

Known as the Gurdwara Darbar Sahib, the temple is believed to have been built on the site where the founder of Sikhism, Guru Nanak, spent last 18 years of his life before he died there in the 16th century.

"I congratulate you and I am happy to be with you today to see that for the first time people can now come from India [through the corridor] to pay the homage," Khan told thousands of Sikh devotees inside the newly built sprawling complex around the temple.

The "historic" opening of the Kartarpur corridor, he said, is a testimony to Pakistan's commitment to regional peace. "We believe the road to prosperity of the region and a bright future for our coming generation lies in peace," the Pakistani leader asserted.

Khan went on to urge Indian Prime Minister Narendra Modi to work for a negotiated settlement to the Kashmir dispute so the two countries can jointly fight poverty and bring regional prosperity to their two nations.

"I asked Modi, 'Why can't we resolve this issue?' What is happening in Kashmir is beyond territorial issue, it's about human rights ... They are being treated like animals. If PM Modi is listening to me, then I would say that peace prevails through justice. Give justice to the people of Kashmir," he said.

Former Indian Sikh prime minister, Manmohan Singh, was among the first pilgrims to cross over into Pakistan to pay respect to the shrine.

"I hope India and Pakistan relations improve enormously as a result of this beginning. It is a big moment," Singh told reporters.

Indian authorities simultaneously imposed a security lockdown and a communications blackout, though it has since been partially eased.

Islamabad rejected the move as a violation of longstanding United Nations resolutions that describe Kashmir as a disputed territory. Pakistan also downgraded diplomatic ties with India.

The territorial dispute has sparked two of the three wars the neighbors have fought since gaining independence from Britain in 1947.

The minority Sikh community in India has demanded access to the shrine for decades. But bilateral tensions blocked progress until last year when Pakistan itself offered to open the Kartarpur crossing.

A large number of devotees from countries such as Canada, Australia and Britain also come to Kartarpur through regular entry points and airports in Pakistan to attend the event. Foreign diplomats based in Islamabad also were flown to Kartarpur to witness the inaugural ceremony.

Saturday was the first time since 1947 - when British India was divided into the two separate states of India and Pakistan - that Indian Sikh devotees were able to cross the border and undertake a visa-free visit to the shrine.

Until now, pilgrims had to go through a drawn-out visa process, often hampered by mutual tensions, and undertake a long journey through Pakistan to reach the temple.

Earlier in the morning, Prime Minister Modi, while inaugurating his side of the corridor, flagged off hundreds of pilgrims from the Indian border city of Gurdaspur.

The United States welcomed the opening of the Kartarpur border crossing as an "impressive project" and congratulated both India and Pakistan on this initiative.

"We see this as a positive example of neighbors working together for mutual benefit. The newly opened corridor is a step toward promoting greater religious freedom," State Department spokesperson Morgan Ortagus noted in a video message she released via Twitter.

The border corridor, under a bilateral pact, would give year-round visa-free access to about 5,000 Indian Sikhs each day to the temple, arriving in the morning and returning in the evening.

Pakistan has constructed a road and a bridge over the Ravi River, along with dozens of fully equipped immigration reception centers for pilgrims. Officials said the dining area near the shrine can host more than 2,500 pilgrims simultaneously, where they will be served free food during Guru Nanak's birth celebrations.

Pakistani officials say the massive construction effort has turned the temple into the world's largest Sikh Gurdwara complex. Already built, or under construction, are a new courtyard, dormitories, locker rooms, a library, a museum, and an embankment to protect the shrine from floods - all in consultation with experts from the Sikh community, the officials noted.