US State Department Approves Possible $2.2B Arms Sale to Taiwan 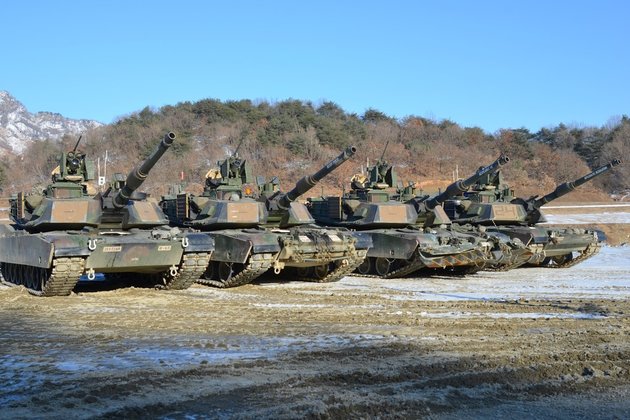 WASHINGTON - The U.S. State Department has approved the possible sale to Taiwan of M1A2T Abrams tanks, Stinger missiles and related equipment at an estimated value of $2.2 billion, the Pentagon said on Monday, despite Chinese criticism of the deal.

China's Foreign Ministry said last month when the possible sale was first reported that it was seriously concerned about U.S. arms sales to self-ruled Taiwan, and it urged the United States to halt the sales to avoid harming bilateral ties.

The sale of the weapons requested by Taiwan, including 108 General Dynamics Corp M1A2T Abrams tanks and 250 Stinger missiles, would not alter the basic military balance in the region, the Pentagon's Defense Security Cooperation Agency said in a statement.

Reuters reported last month that an informal notification of the proposed sale had been sent to the U.S. Congress.

The United States is the main arms supplier to Taiwan, which China deems a renegade province. Beijing has never renounced the use of force to bring the island under its control.

Taiwan President Tsai Ing-wen said in March that Washington was responding positively to Taipei's requests for new arms sales to bolster its defenses in the face of pressure from China. The United States has no formal ties with Taiwan but is bound by law to help provide it with the means to defend itself.

Taiwan's Defense Ministry confirmed it had requested those weapons and that the request was proceeding normally.

The U.S. commitment to providing Taiwan with the weapons to defend itself helps Taipei's military raise its combat abilities, consolidates the Taiwan-U.S. security partnership and ensures Taiwan's security, the ministry said last month in a statement.

U.S. stocks on a roll, Nasdaq at new record high

NEW YORK, New York - Despite the number of Covid-19 cases in the United States topping 3 million on Wednesday, ...

In the past month, there's been an outpouring of support for Black Lives Matter from America's largest corporations.You might have ...

NEW YORK, New York - Stocks in Asia were mostly on Wednesday, in line with the sell-off globally a day ...

Vouchers instead of refunds in case of canceled flights disappoint

One of the lessons the current coronavirus pandemic has taught us is that we depend on electronic devices more than ...

TEHRAN (Tasnim) - China on Wednesday defended the World Health Organization and lashed out at the US decision to withdraw ...

Bullying of International court and Bank of England laid bare

On January 9, 2020, Ambassador Karen Pierce-the United Kingdom's permanent representative to the United Nations-spoke at a meeting on the ...

Countries across the globe re-thinking reopening as coronavirus surges

As coronavirus cases around the world approach 11.5 million, governments are struggling with how to reopen their economies, leading some ...

North Dakota pipeline supported by Trump ordered to be closed

A U.S. federal judge ruled Monday that a controversial pipeline that runs through Native American lands in North Dakota be ...