We're not seeing a 'populist surge' in this election. Why not? 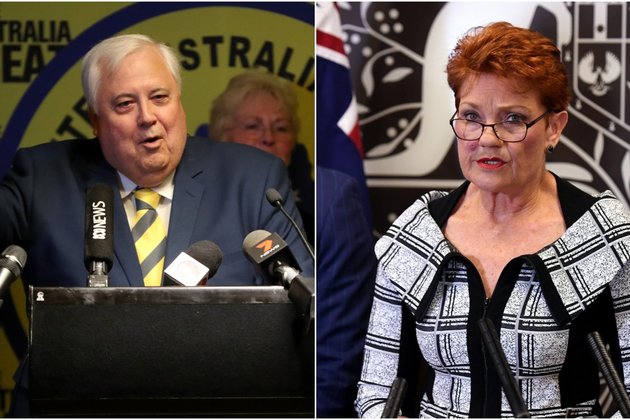 One of the most significant, and unremarked, features of the 2019 Australian federal election has been the absence of what might be termed a "populist surge".

In the most recent Newspoll, the United Australia Party and Pauline Hanson's One Nation are polling at about 8% of the vote combined. This is tiny in comparison to, for example, Marine le Pen's right-wing Rassemblement National in France, which is currently polling at 22% in the lead up to the European Parliament elections.

The current elections in Australia indicate that there is nothing equivalent to the mood that led either to the election of Donald Trump in the United States or the Brexit vote in the United Kingdom. There is no firebrand leader galvanising Australians into a populist revolt, and it appears that no lower house electorates will fall to such a figure.

Let's take a look at why.

Our electoral system is hard on newcomers

Part of the reason is technical. The Australian electoral system for the House of Representatives, based on single member electorates, makes it very difficult for newcomers to win a seat.

This is exacerbated by the fact that the electorates have being growing in size over the years. Section 24 of the Constitution establishes the so-called nexus, which states that the size of the House of Representatives must be twice the size of the Senate. Despite significant growth in Australia's population, the number of House of Representative members has remained static. This has resulted in ever larger electorates in terms of the number of voters.

More importantly, over the years, redistribution has increased the geographical size of many rural electorates. This makes it difficult for minor parties or independents to attract support across a large geographical area composed of disparate communities.

Independent candidates tend to have built up a support base in the major provincial city within an electorate. While this might be sufficient for election to a state legislature given the smaller size of state electorates, it makes life very difficult at a federal level.

One example of a serious outside contender is Kevin Mack, the Mayor of Albury. Mack is standing against the current Liberal member, Sussan Ley, in Farrer, where constituents are fired up over lack of access to water under the under the Murray-Darling Basin plan. Farrer covers the territory of the New South Wales state electorate of Murray, which was claimed by the Shooters, Fishers and Farmers in the recent state election.

In cases where independents or minor party candidates in the large federal electorates manage to collect enough support to get elected, it's usually because they come in second, and take advantage of preferences to get them over the line.

Paradoxically, the Australian system of single member electorates combined with preferential voting gives smaller parties and independents considerable influence in terms of preference allocation. But makes it unlikely that they will be elected to parliament.

Immigration hasn't been an election issue

As political newcomers, populists require some issue or image or myth that will capture the imagination and stimulate enough of the emotional side of human nature to lure electors from their traditional political allegiances.

Eric Kaufmann, a professor of politics in the UK, argues in his book White Shift that immigration is the issue that's fuelling much contemporary populism.

Covering a wide range of countries, Kaufmann points to data indicating that it's neither being "left behind" nor economic matters that are the spark the populist fuse, but culture and the perception that immigration leads to cultural loss.

If that's the case, it explains a lot about the current election. Immigration has not featured heavily as an issue. Instead, the focus has been on other matters, mainly of an economic nature.

Without immigration as an issue to fire the imagination and stir the emotions, would-be populists have little to inspire support for them. This situation may also be exacerbated by the fact that, unlike Donald Trump, Australia's two populist leaders, Pauline Hanson and Clive Palmer, lack the fire to spark a populist revolt. Enduring Clive Palmer's seemingly endless advertisements on YouTube is a struggle in itself.

Australian populism has been largely confined to rural and regional areas that don't have much experience of the effects of immigration. If immigration was going to be a major issue in Australia, you would expect it to resonate in outer suburban areas of the large cities.

In the example of Farrer, where the established member is seriously challenged, there is a local issue that has stirred the passions of the people.

This suggests that Australian populism is quite different from populism in other countries. It's more a form of long-term grumble about the state of the world than a sharp reaction to the threat of cultural loss.

So, populism will have much less impact on the Australian elections than on those of other comparable countries. Pauline and Clive should be asking themselves why their level of support is so low.