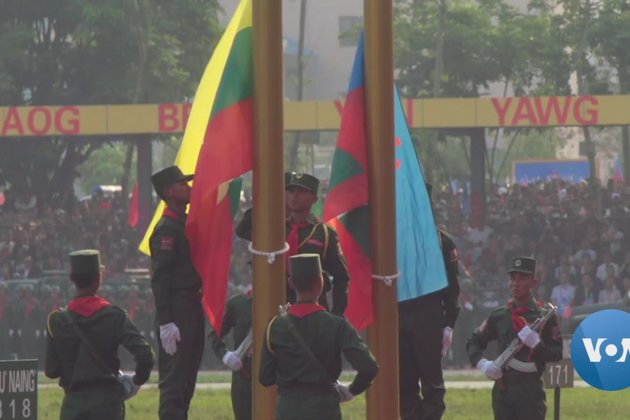 WA STATE, MYANMAR - Loud explosions and billowing smoke filled the air above the national stadium in the highly militarized capital of Panghsang in Myanmar's Shan state - but it wasn't what one might expect in a region known for its heavily armed troops.

The powerful United Wa State Army (UWSA) was celebrating 30 years of autonomy last month, with heavy security posted around the city stadium and big guns on parade inside.

The celebration was held to commemorate the ousting of leaders of the Communist Party of Burma during a coup in April 1989, followed by the formation of the United Wa State Army and a bilateral cease-fire agreement with the Burmese army, signed on May 9, 1989.

About 18 ethnic groups from the region were included in the military-controlled performance and senior officials from other ethnic armed groups attended the three-day event.

For Kachin dancer and former Communist Party of Burma soldier Bauk Doi, it was a time to reflect on the big changes in the rugged mountain region.

'In the past when I lived in Wa state area, the children and adults were very far behind and kids didn't know how to put their clothes on so I had to teach them. The condition of the houses was not strong and they only had bamboo to build their homes. But now, 30 years later, they are developing very fast and I'm happy for them,' said the 60-year-old.

Much of the development has come from Chinese investment, a fact punctuated by China's special Envoy for Asian Affairs, Sun Guoxiang, who sat next to Wa leader Bao Youxiang during the parade and fireworks display.

While the China-backed UWSA aren't directly involved in the current peace talks, they have a strong influence in the narrative, serving as the chair of the Federal Political Negotiation and Consultative Committee (FPNCC).

Seven ethnic organizations are part of the committee, including the United League of Arakan whose army is active in Rakhine state - and aware of China's leverage.

'China is a major power. Our neighboring country. It has a lot of influence in terms of investment - politically, economically - in many arenas, so yes, they can help,' said Maj. Gen. Tun Myat Naing of the Arakan Army.

Tun Myat Naing also says the Arakan people are suffering, much like the Rohingya crisis.

'It is the Arakan people. We are also suffering from the war crimes being committed by the Myanmar army. So I would like to request to the international communities, please don't turn a blind eye on the suffering of our people too,' Tun Myat Naing added.

Aung San Suu Kyi and Burmese military chief Min Aung Hlaing did not take up the invitation to attend the ceremony, although Union Minister U Thein Swe did and read a statement on behalf of ASSK and the National Reconciliation and Peace Center.

While the statement acknowledged the successful peace and stability within Wa No. 2 Special Region, it also signaled the government's desire to have all ethnic groups sign the National Ceasefire Agreement, which focuses on unity rather than autonomy.

The content of the agreement has remained a contentious issue that has caused several of the strongest ethnic armed groups to walk away from the bargaining table in recent years.

'Only after signing the NCA - Nationwide Ceasefire Agreement - would we be able to convene the political dialogues which would result in reduced armed conflicts for maintaining durable peace, efforts for monitoring and conflict resolution, ethnic rights, equal rights and achieving unity,' the statement read.

Upcoming peace talks in Chinese border towns further exhibit the strong influence of Chinese investors and the growing desire for stability as planned infrastructure projects are pushed ahead of genuine peace and trust-building.

Myanmar and China have agreed to build an Economic Corridor from Yunnan to the Bay of Bengal as part of China's Belt and Road Initiative, but the the current instability is preventing the construction from being completed.

The economic corridor route is set to be built through Shan and Rakhine state, also areas of instability.

'We have a long time relationship with China, because we are the ethnic group in China border and the Chinese are our brothers. ... In the future, we are going to be united in China,' said Zhao Guo An, vice-chairman of the UWSA, on the sidelines of the ceremony.

Despite three decades of peace, Guo An and the UWSA senior officials are still wary of the government forces' intentions.

'We have to trust each other, but there is still a long time to go. It's been 30 years without the war flame, but we are still negotiating to keep the peace,' he added.