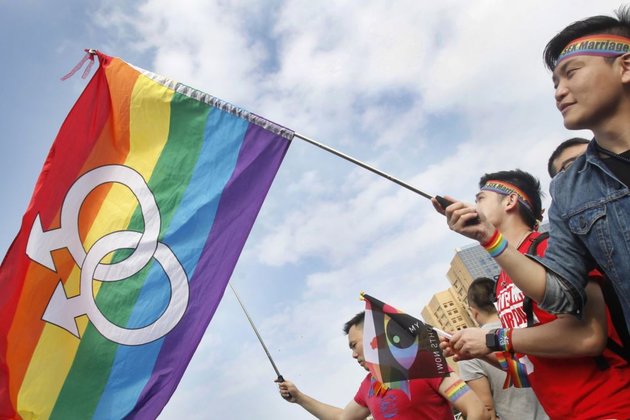 KUALA LUMPUR - Taiwan's lawmakers must back the government's draft same-sex law and make the self-ruled island the first place in Asia to allow such unions, LGBT+ campaigners said on Monday, ahead of a key vote in parliament this week.

Taiwan has until May 24 to legalize same-sex marriage after a 2017 ruling by the island's top court. The court did not give specific guidance on how laws regulating such unions should be drawn up.

Parliament will vote on Friday on same-sex marriage but there are three bills that have been proposed - one by the government and two by lawmakers which LGBT+ groups have described as discriminatory.

'We won't accept any more compromise because the (government's) bill is already our bottom line,' said Jennifer Lu, the chief coordinator of Marriage Equality Coalition Taiwan, an alliance of groups that support gay rights.

'If one of the two other bills is passed, we will launch another constitutional court challenge,' she told the Thomson Reuters Foundation.

Despite some limitations on adoption and foreign spouses, Lu said the government's draft law would give same-sex couples similar legal protections for marriage as heterosexuals.

The coalition is urging supporters to gather outside the parliament on Tuesday and Friday ahead of the vote.

Legalization of same-sex marriage in Taiwan has become complex after voters opposed marriage equality in a series of referendums last November, dealing a blow to the island's reputation as a beacon of liberalism in Asia.

More than two-thirds of those who voted in the referendum wanted to retain the definition of marriage as between a man and a woman under the civil law.

The government's bill proposed same-sex marriage to be legalized under a separate law - a move it said respected both the court ruling and the referendum results.

The two other bills - proposed by a ruling and an opposition legislator respectively - offer less protections, does not recognize a gay partner as a spouse, or give relatives the right to ask for an annulment of the marriage.

'A child will not be protected if their parents are not seen as spouses under the law,' said Reese Li, a spokeswoman from the lobby group LGBT Family Rights Advocacy, which assists same-sex families with children.

'We will only support the government's bill,' added Li, who estimates there are at least 300 same-sex families in Taiwan.

The same-sex marriage issue has been a challenge for President Tsai Ing-wen, who campaigned on a promise for marriage equality in the run up to 2016 polls.

Conservative groups that have opposed same-sex marriage have accused the government of ignoring the referendum results and said the government's draft law was unacceptable.