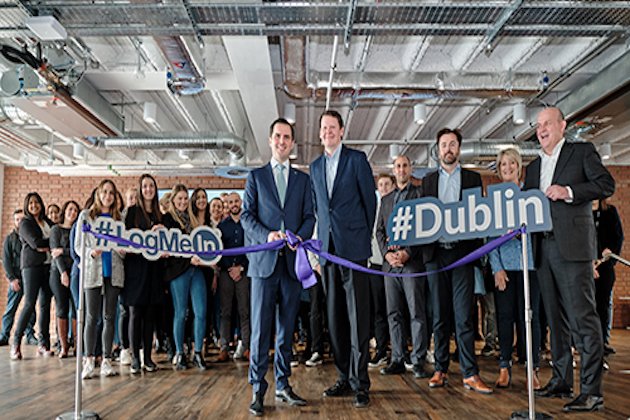 <p>DUBLIN, Ireland - A leading provider of cloud-based connectivity and recognized as one of the world&rsquo;s 10 largest public Software-as-a-Service (SaaS) companies on Thursday officially opened its new international headquarters in Dublin.</p><p>LogMeIn Inc., with the support of IDA Ireland has built its new HQ in the Reflector Building, Grand Canal Dock.</p><p>Billed as a market leader in unified communications and collaboration, identity and access management, and customer engagement and support solutions, LogMeIn has a customer base in the millions, spanning virtually every region across the globe that includes users of its products, including LastPass, GoToConnect, GoToRooms and Bold360.</p><p>LogMeIn first established a Dublin office in 2012 and says it has rapidly grown its business since, to serve clients worldwide from Ireland.&nbsp; The new facility in Dublin, the company says will allow LogMeIn to establish a management decision-making centre in Europe with plans to recruit an additional 200 high level positions. These include customer success managers, as well as additional sales, marketing, legal, HR and IT roles.</p><p>The company&rsquo;s new offices cover 40,000 sq. ft. and are part of the company&rsquo;s ambitious plans to create over 1,000 new jobs globally over a three to five year period.</p><p>The Reflector building is a landmark office development in Ireland completed in 2018. The six-storey building is split into two wings, comprising office and retail space, with area for a ground floor restaurant and parking. LogMeIn benefits from a training centre for 80 people, broadcast studios with state-of-the-art audio-visual facilities, fifth floor panoramic terrace, gym, library and gaming areas.</p><p>LogMeIn was recently recognized as one of Dublin&rsquo;s best employers according to Great Places to Work 2019. The new Dublin office was also the host venue for the grand final of the company&rsquo;s HackIn competition, LogMeIn&rsquo;s international hackathon, which saw product managers, designers and engineers take a break from their day jobs to imagine, design and code prototypes to solve a customer pain point, improve an internal process, or demonstrate an emerging technology. &nbsp;</p><p>&nbsp;&quot;LogMeIn is certain that by investing in growth-enabling infrastructure in Dublin, it is able to retain its focus on competitiveness and develop new products to continually help our customers and that will also create jobs, spreading the benefits to the broader community in Ireland,&quot; Bill Wagner, CEO, LogMeIn said Thursday. &quot;Our new office is central to LogMeIn leading the innovation race, while building our international hub to serve our customers worldwide and attract the highest level of talent available.&quot;</p><p>Commenting on the company&rsquo;s investment and commitment to further growth in Ireland, CEO, IDA Ireland, Martin Shanahan said &quot;Ireland has a well-deserved reputation as an international location for key global players in Software-as-a-Service (SaaS) in recent years due the talented tech and multilingual workforce based here. LogMeIn&rsquo;s decision to further invest in its people with this fantastic new headquarters in the heart of Dublin&rsquo;s tech centre is a clear demonstration of the confidence the company has in the City.&quot;</p><p>LogMeIn, which is based in Boston, Massachusetts, has other offices in North America, South America, Europe, Asia and Australia.</p>