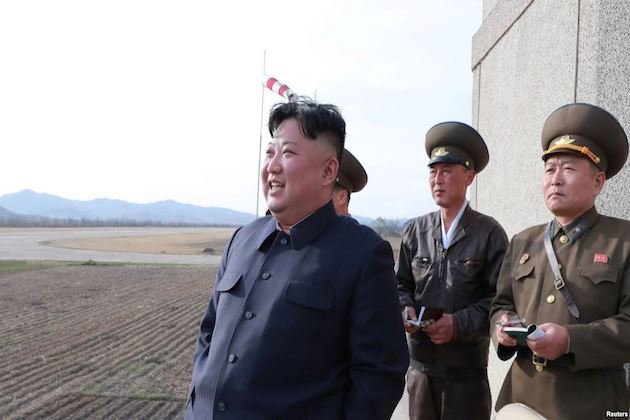 <p>SEOUL, South Korea - North Korea has tested a new &quot;tactical guided weapon,&quot; the latest display of Pyongyang&#39;s military capabilities, state media reported Thursday.</p><p>Kim Jong Un supervised and guided the test, calling it an operation of &quot;very weighty significance,&quot; the official Korean Central News Agency said.</p><p>The report did not elaborate on the type of weapon, but the phrase &quot;tactical&quot; suggests it is not a long-range ballistic missile. U.S. officials have not commented on the test.</p><p>&quot;The design indexes of the tactical guided weapon, whose advantages are appreciated for the peculiar mode of guiding flight and the load of a powerful warhead, were perfectly verified at the test-fire conducted in various modes of firing at different targets,&quot; KCNA said.</p><p>North Korea has not carried out a major provocation such as a nuclear or long-range missile test for well over a year, since Kim began talks with the United States and South Korea.</p><p>Instead, the North has carried out smaller provocations. In November, Kim oversaw the test of what KCNA also referred to as a newly developed &quot;high-tech tactical weapon.&quot; U.S. officials later played down the significance of that test.</p><p>Nuclear talks between the United States and North Korea have been stalled since a February meeting in Hanoi between Kim and U.S. President Donald Trump ended in no deal.</p><p>Trump wants Kim to completely abandon his nuclear weapons program in exchange for sanctions relief. Kim has only offered limited steps toward denuclearization.</p><p>Last week, Kim said he was open to another summit with Trump, but warned he would only give the U.S. until the end of the year to change its &quot;approach&quot; to the negotiations.</p><p>A North Korean official said last month that Kim is considering resuming missile tests and pulling out of the talks with the United States.</p><p>Meanwhile, commercial satellite photos from last week showed increased activity at North Korea&rsquo;s main nuclear site, according to a U.S. research organization.</p><p>The Center for Strategic and International Studies noted the presence of five specialized railcars at the Yongbyon nuclear complex.</p><p>&quot;In the past, these specialized railcars appear to have been associated with the movement of radioactive material or reprocessing campaigns,&quot; the report said.</p><p>Also Wednesday, Kim carried out a public inspection of a military unit for the first time in several months, reviewing a flight exercise of the Korean People&rsquo;s Army.</p><p>Kim is expected to meet next week with Russian President Vladimir Putin. With U.S. negotiations stalled, Kim is likely to push Putin to provide economic aid and sanctions relief.</p>

SYDNEY, NSW, Australia - Stocks in Asia lost ground on Tuesday. The Australian market missed the damage as markets were ...