Parisians still in shock as damage to historic cathedral is assessed 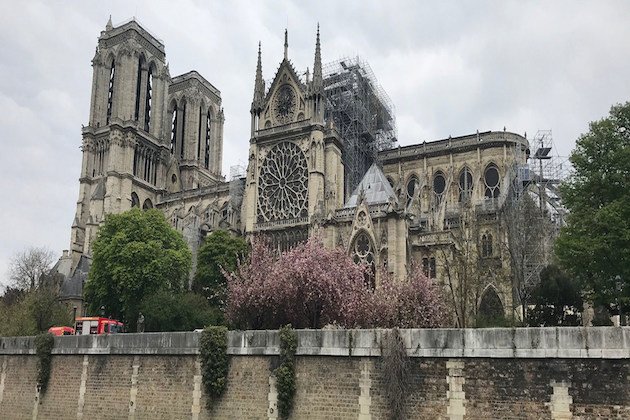 <p>PARIS, France - Two-thirds of the largely medieval roof of Notre Dame cathedral in Paris are &quot;gone&quot; after the devastating fire in Paris on Monday evening, but UN cultural experts are standing by to offer help where it is needed in rebuilding the iconic structure.</p><p>That&rsquo;s what&nbsp;<a target="_blank" href="https://en.unesco.org/">UNESCO</a>&nbsp;World Heritage Centre Director Mechtild R&ouml;ssler told UN News after visiting the site on Tuesday.</p><div style="box-sizing: border-box; float: right; caret-color: rgb(51, 51, 51); color: rgb(51, 51, 51); font-family: Roboto, &quot;Helvetica Neue&quot;, Helvetica, Arial, sans-serif; font-size: 14px; font-style: normal; font-variant-caps: normal; font-weight: normal; letter-spacing: normal; orphans: auto; text-align: start; text-indent: 0px; text-transform: none; white-space: normal; widows: auto; word-spacing: 0px; -webkit-text-size-adjust: auto; -webkit-text-stroke-width: 0px; text-decoration: none;"><div style="box-sizing: border-box;">&nbsp;</div></div><p>&quot;I saw many, many people going from the Metro, to the site of Notre Dame, and I have to say many are still in a state of shock, because it&rsquo;s not only the Christian community, it&rsquo;s a building for all of us&quot;, she said. &quot;Really, it&rsquo;s a universal symbol and it&rsquo;s the centre of France &hellip;I think this is really shocking people profoundly and they lost something that is part of their identity,&quot;&nbsp; she said Tuesday.&nbsp;</p><p>Dr R&ouml;ssler said that a team of UNESCO experts is on hand to investigate the stability of the stonework and potential damage to stained glass windows, echoing&nbsp;<a href="https://en.unesco.org/news/fire-notre-dame-cathedral-paris-unesco-stands-france-safeguard-and-rehabilitate-historic">a statement</a>&nbsp;by the UNESCO Director-General, Audrey Azoulay, in which she announced that a &quot;rapid damage assessment&quot; would be carried out as soon as possible with the authorities.</p><p>After visiting the site of Notre Dame on Monday night Ms. Azoulay said &quot;we are all heartbroken.&quot;<strong>&nbsp;</strong>The Cathedral is part of the World Heritage site officially known as&nbsp;<a href="https://whc.unesco.org/en/list/600">&quot;Paris, Banks of the Seine&quot;</a>, inscribed on the World Heritage List, in 1991.&nbsp;</p><p>&quot;Notre Dame represents a historically, architecturally, and spiritually, outstanding universal heritage. It is also a monument of literary heritage, a place that is unique in our collective imagination&quot;, said the UNESCO chief, adding that the inferno which engulfed the cathedral, but appears to have left the medieval stonework intact, &quot;reminds us of the power of heritage that connects us to one another. We are receiving messages of support from all over the world.&quot;</p><p>The cathedral, where construction began in the 1160s extending for more than a century, is considered to be the finest example of the French Gothic style of architecture, with its groundbreaking use of rib vaults and buttresses, stained glass rosettes and sculpted ornaments.</p><p>(Photo by UNESCO/George Papagiannis. Pictures Notre-Dame cathedral after the fire. Sections of the cathedral were under scaffolding as part of extensive renovations).</p>