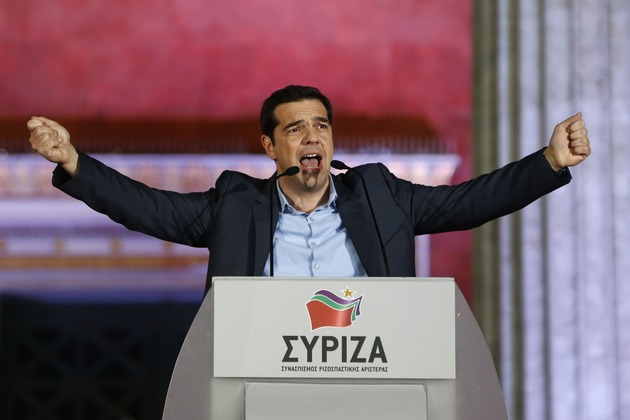 ATHENS - Greek Prime Minister Alexis Tsipras on Tuesday voiced hope that bailout talks between the cash-strapped country and its international creditors are "very close" to an initial deal.

He also said that he might resort to a public referendum on any deal with the country's international creditors if the package appears to go beyond the political mandate that brought his leftist government into power.

The statement came a day after Tsipras overhauled his negotiating team in an effort to accelerate debt talks and unlock crucial rescue funding.

He has sidelined finance minister, Yanis Varoufakis, who has frustrated eurozone officials with his abrasive style and perceived foot-dragging. , Instead the more mild-mannered Foreign Ministry official, Euclid Tsakalotos, would handle day-to-day discussions.

Tsipras told private Star TV that he believes a first agreement can be struck by the end of next week, which can then be ratified by Greece's European partners.

"I think that by the 9th of May we will have an agreement" that will allow release of some bailout funds, he said in a three-hour interview screened just before midnight Monday.

Since it came to power in January, Tsipras's radical left government has been locked in increasingly fraught talks with other European countries that use the euro currency.

Dutch finance minister, Jeroen Dijsselbloem, said in a television interview on Tuesday that putting an agreement to a vote by the Greek public "will cost money and create great political uncertainty". Dijsselbloem is the head of the Eurogroup of finance ministers, which is leading the negotiations with Greece.

"I don't think we have the time," he said, adding, "Neither do the Greeks have time."

Pushed to reveal his course of action in the event of a deadlock in talks with creditors, Tsipras said he would turn to Greek citizens.

"If I find myself in the difficult position of an agreement which falls outside our mandate, then the Greek people will have to give the answer," he said, adding, however, that "I am certain we will not reach that point."

He ruled out calling for an early general election. "Obviously I'm not going to go to elections," he added. "What for?"

Underlining that his government's mission was to "stop the vicious circle of austerity, misery and looting," Tsipras repeated his opposition to more pension cuts and mass dismissals in the labor market, said NYT.

He said, however, that an unpopular property tax, which his Syriza party had promised to abolish, might have to stay in place until 2016 because of budgetary constraints. He also appeared more flexible on the sale and lease of state assets, suggesting that port and airport deals could proceed.

Officials of the new negotiating team, being coordinated by Tsakalotos, started work late Monday on drafting legislation that, it is hoped, will win over creditors.

The bill is to include "fiscal issues, tax administration, the auction of frequencies for TV channels, taxation of TV commercials and administrative reform," according to the Finance Ministry, reported NYT.